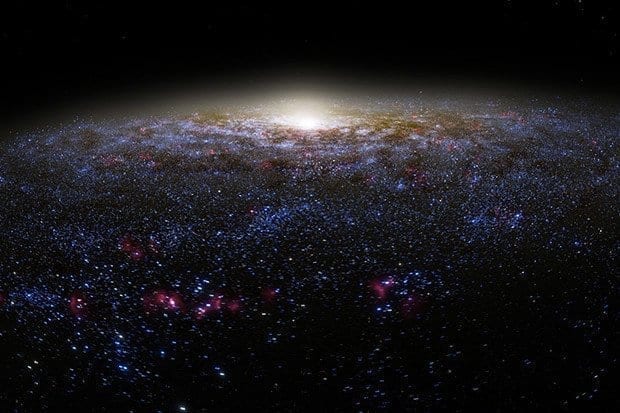 Humans have always gazed up in wonder at the stars. It is sometimes hard to believe that we only represent an infinitely small entity in the vast universe. From our point of view here on Earth we observe through our precise instruments the depths and mysteries of space while still being able to observe with our naked eye unique phenomenon of astounding beauty such as the aurora borealis ( the Northern Light ) in the night sky.

As part of their 2015 theme on light, Montreal’s Space for Life recently launched the double feature Dark Universe and Aurorea; two new multimedia shows at the Rio Tinto Alcan Planetarium. Both shows offer immersive journeys that combine science, music and art under the domes of two separate theaters.

The first part of the presentation is a 23-minute show entitled Dark Matter, presented in the Chaos Theater. Guests enter the dome in single file and have to choose between the benches that line the walls of the dome or select to lie down in one of the numerous bean-bags scattered around the floor.  I personally enjoyed sinking into one of the comfy beanbags to fully experience the 360° show:

The hemispheric dome comes to life under the smooth narration of astrophysicist Neil de Grasse Tyson as the guests embark on a voyage to the very limits of outer space designed by a team of astrophysicists and scientific visualization experts from the American Museum of Natural History, the California Academy of Sciences and GOTO INC.

The journey roams from galaxy to super cluster as participants learn more about the origins of the Universe and its evolution. With exquisite renderings of stars and galaxy clusters, it’s an exploration into the structure of the visible Universe and the mysterious dark matter that we can’t see and are only beginning to understand.

I would highly recommend the show for families with children 7 years of age and older as the narrative contains some scientific jargon and data to accurately describe astronomical discoveries and answers some timeless questions.

On average the aurora borealis are visible 240 nights a year in the northern hemisphere. The second part of the journey is a 40-minute presentation shown in the Milky Way Theater entitled Aurorea. Audiences are invited to lean back and wonder at the mysteries of the electrifying northern lights.

In March 2015, a team from the Rio Tinto Alcan Planetarium traveled to Yellowknife, in the Northwest Territories, to spend many frigid nights filming no fewer than 179,000 images of the northern lights, in 360°. The crew had the perfect conditions to observe these shimmering waves of light, beneath a clear sky,  far from sources of light pollution.

Directors Philippe Baylaucq and Sébastien Gauthier have put together an original immersive show. Gauthier, in co-operation with Loïc Quesnel, set the images to music by DJ Champion to create an exceptional experience for audiences. The show is accompanied by live commentary by the planetarium’s science interpreters, explaining the origin of these fascinating luminous phenomenons.

Several showings of both films are scheduled daily except Mondays. It is also good to note that there are English and French versions of both viewings.

Together, they launch a daring, creative urban movement, urging everyone to rethink the connection between humankind and nature while cultivating a new way of living.