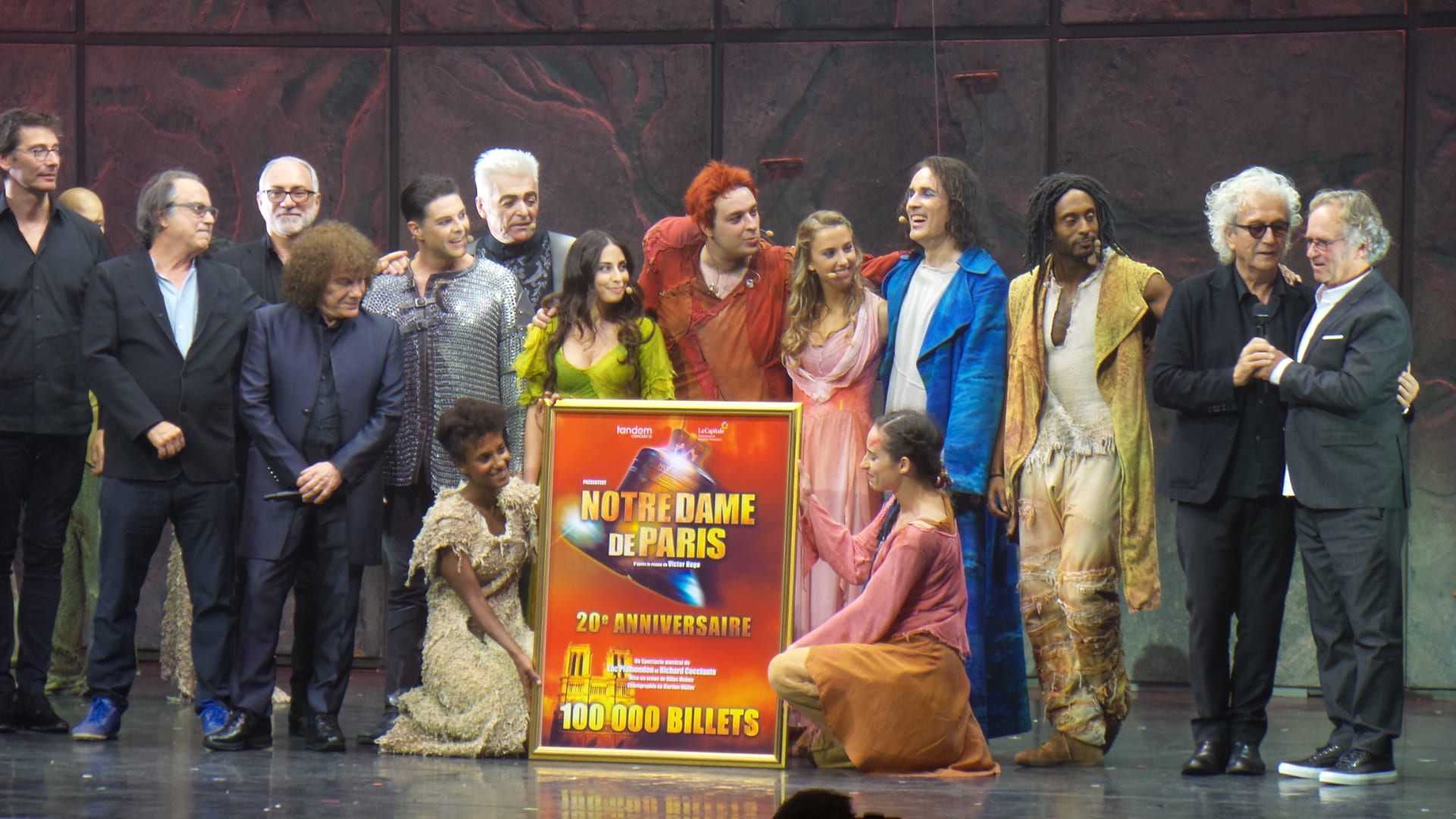 The Power of LOVE expressed through music.

LOVE is such a powerful emotion … Young, old, beautiful or deformed, people have their own unique ways of expressing it .

This week Gen’s Delights presents for your consideration, a few currently running concerts and shows that are sure to pull at your heart strings while contemplating the mysterious nature of love. 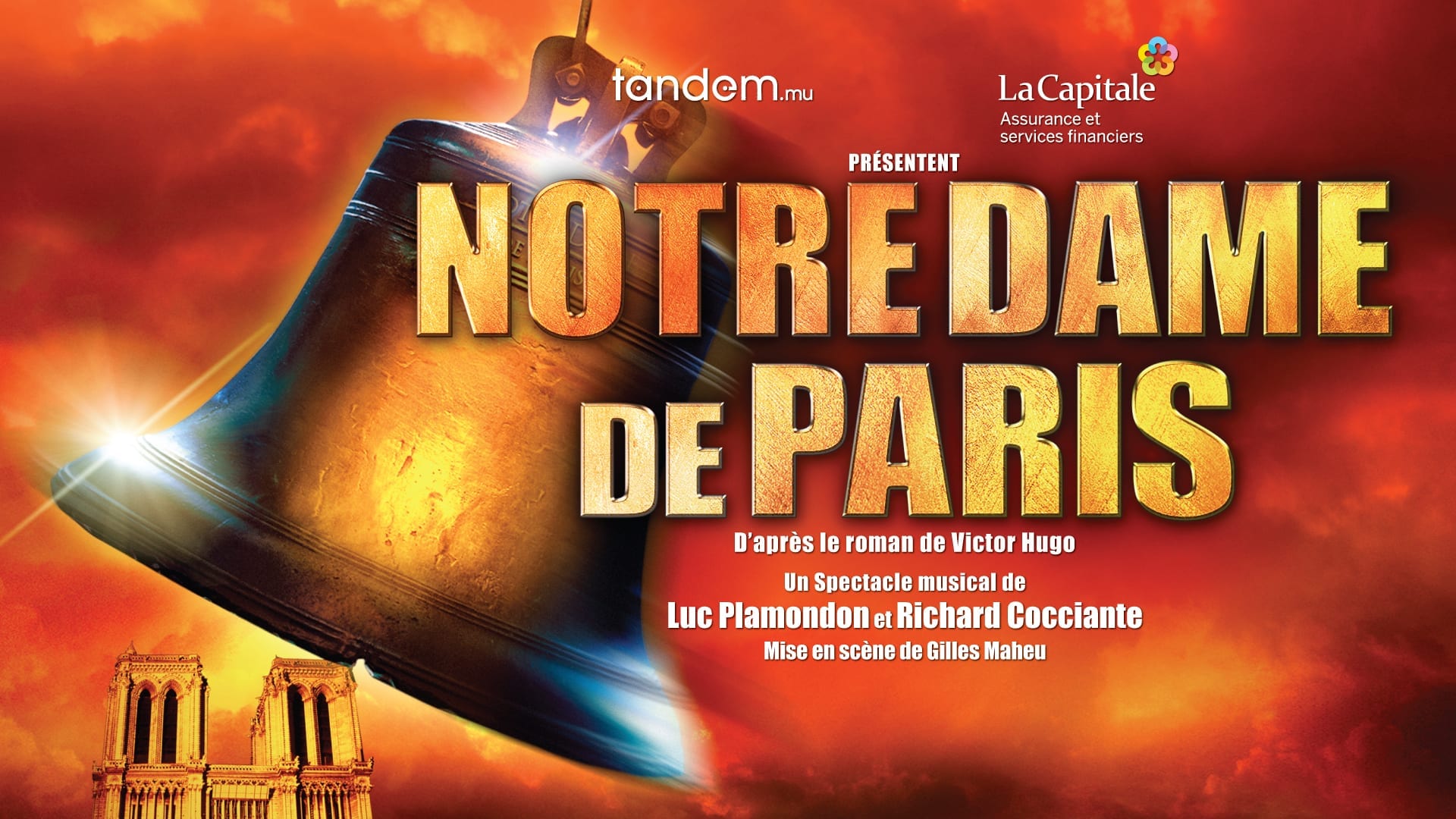 Based on Victor Hugo’s heart wrenching tale of social injustices and unrequited love, Notre Dame de Paris (The Hunchback of Notre Dame) is a fantastic musical production with music by composer Riccardo Cocciante and lyrics by Luc Plamondon.

The musical is currently celebrating its 20th anniversary with over 100,000 tickets already sold for its Montreal run.

All three men vie for her affection, but ultimately it is Phoebus that captures the gypsy’s heart. During a heated tryst, a jealous Frollo stabs Phoebus and Esmeralda is unjustly blamed for the crime and eventually hung.  Years later, the entwined skeletons of both Esmeralda and the heartbroken Quasimodo are found embracing in its tomb…

Directed by Gilles Maheu, the production features stunning decors by Christian Rätz with a cast of over 40 performers that include skilled acrobatic circus dancers that run, jump, climb, spin and twirl furiously on stage and up on the Cathedral walls, under the direction of chorographer Martino Müller .

I was particularly touched by the dramatic unbridled performances of Angelo Del Vecchio as the deformed but ever devoted Quasimodo. His gut wrenching final number (Danse mon Esmeralda) , as he cradles the limp body of his beloved Esmeralda while otherworldly ghost figures float lithely in the background, perfectly embodies the image of a man in terrible anguish – who has to part with the only person who ever showed him kindness.

Another noteworthy applaud goes to Daniel Lavoie as the only comedian to have been part of the original cast that continues to charm audience members with his interpretation of the repressed Frollo. In the number (Etre Prêtre et Aimer Une Femme) we see the full scope of emotional depths he brings to the character- a role that has matured well with time.

From the opening act to the riveting end, each scene raises the enthusiasm of the crowd that is eager and happy to be swept into the ocean of emotions that casts enchantment, raises terror and draws tears.

Despite brief moments of lightness and joy, Notre-Dame de Paris remains a compelling reminder of the cruelness of men and that we are all powerless in the hands of Fate.

For tickets and information please visit: 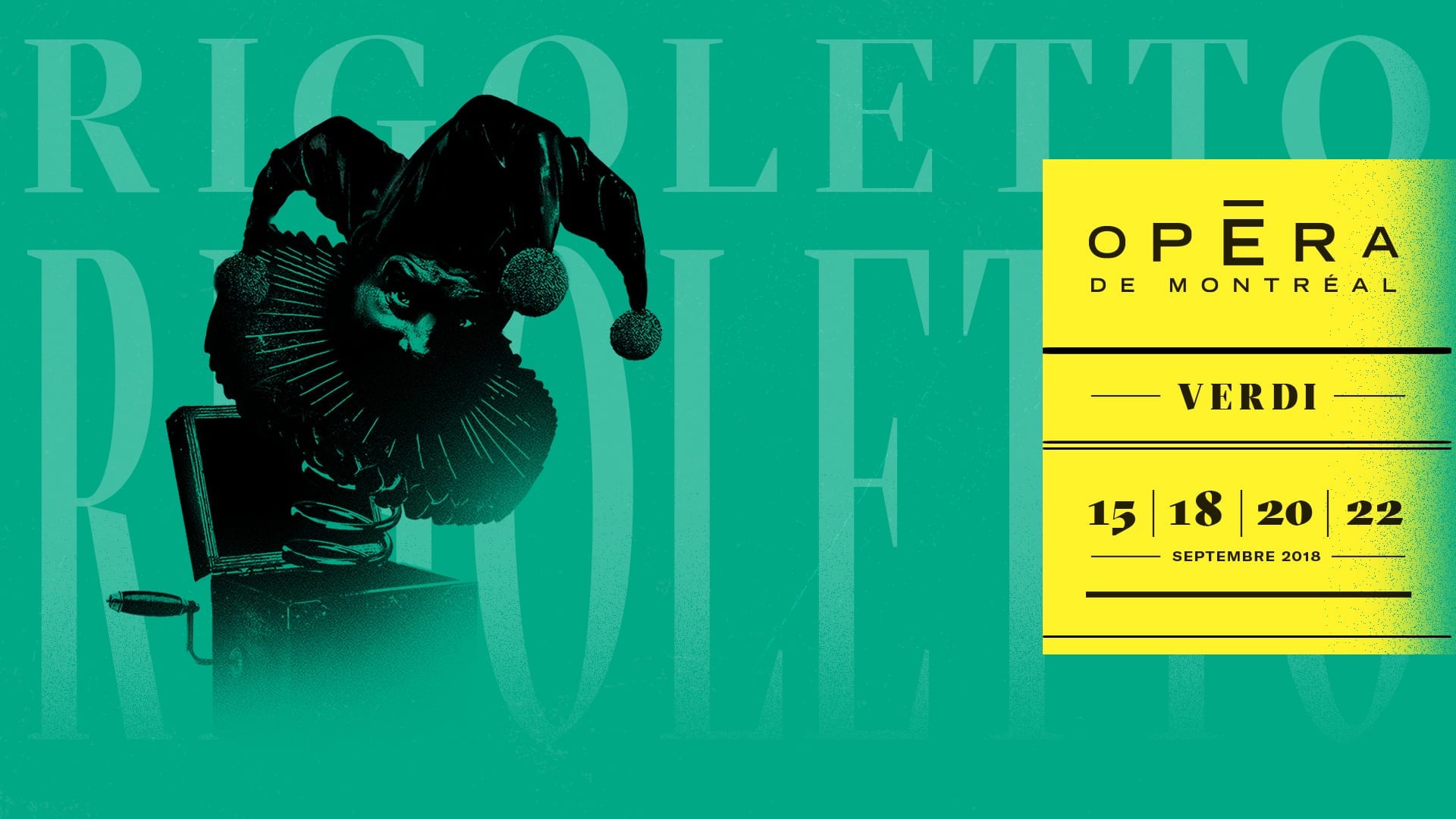 Inspired by Victor Hugo’s play Le Roi s’Amuse, RIGOLETTO by Giuseppe Verdi, remains one of the most enduring and popular pieces of opera repertoire.

Opening its 29th season, l’Opéra de Montréal’s 2018 production of this 19th century classic at Salle Wilfrid-Pelletier in Place des Arts is a brilliant gem that features beloved arias, stately costumes and a lavish set which seamlessly helps to propel the fast paced story along.

The real topping on the cake is that Verdi’s emblematic characters are sung by an impressive roaster of talented, mostly Canadian singers, including soprano Myriam Leblanc as Rigoletto’s innocent and self-sacrificing daughter Gilda who had one of the most clear and beautiful voices of the production.

Director Michael Cavanagh as well as Italian conductor Carlo Montanaro, who leads the Orchestre Métropolitain and the Opéra de Montréal Chorus,  brings to life the tragic story of Rigoletto ( sung by Canadian Baritone James Westman):  a deformed jester, but protective father, who works in the morally questionable Renaissance court ruled by the philandering Duke of Mantua (played by René Barbera).

Rigoletto tries to shield his innocent daughter away from the amorous advances of the depraved Duke, however his efforts are in vain as he successfully finds Gilda and seduces her. To avenge his daughter, the jester hires an assassin, but a curse turns the tables of fate around…

In this age of #Metoo and sexual abuse cases reported in the media, stage portrayals of revenge, seduction and treachery are not to be taken lightly, however the opera – and particularly this production , is a pure marvel to watch with its universal themes and catchy melodies performed by a brilliant cast that speak directly to our hearts.

We cannot help but hum after the show: “La donne è mobile (Women are fickle) –  ironic title in light the plot –  We ask ourselves : What crazy things have we ourselves done in the name of love ?

Sung in Italian with English and French subtitles.

Katie Markham – Someone Like You – Adele Tribute this Friday at Place des Arts!

Academy Award winner, Artist of the Year, 100 Greatest Women in Music, TIME’s most influential woman…The accolades continue for singer songwriter Adele.  With millions of records sold worldwide, we can’t help but fall under the charm of her numerous love ballads that speak about hope , lost and dreams…

When X Factor finalist Katie Markham was hand selected by Adele to appear in the BBC Adele Special presented by Graham Norton, she never dreamed she would be both singing live with her idol on stage in London and launching a brand-new touring show, all within a year!

Now, Katie is touring America and with 2018 marking 10 years since the sensational debut album ‘19’ was released, Katie Markham will bring an incredible performance to theaters across the UK and America recreating the magic that the legendary Adele started a decade ago !

Katie states: “There is a real beauty to Adele’s music. I think that’s why it appeals to so many people, she lays raw emotion out for all the world to see.”

Come and experience this immaculate concert production that will recreate the magic of Adele’s music from her three hit albums – 19, 21 and 25 – reminding audiences why they first fell in love with her beautiful music ten years ago. 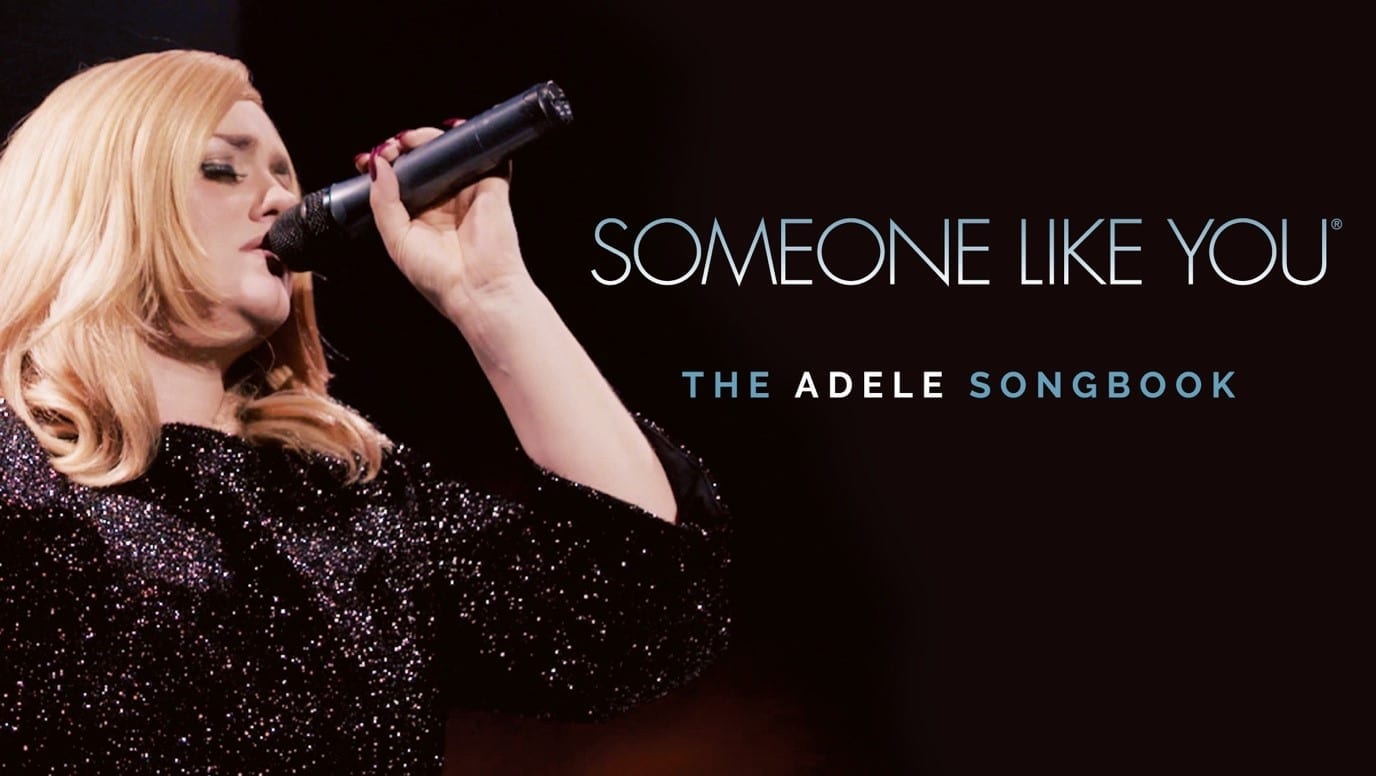 Featuring the smash hits Chasing Pavements, Make You Feel my Love, Set Fire to the Rain, Someone Like You, Rolling in the Deep, Hell’ and the multi-million seller Skyfall, as well as featuring a selection of songs by some of the legends that inspired Adele, Someone Like You is the quintessential show for any fan of Adele.

For tickets and info please visit :