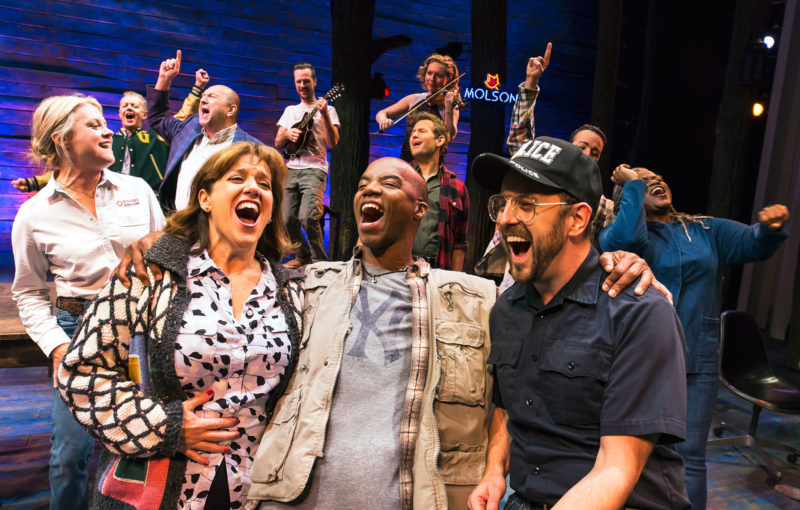 The Heartwarming Broadway musical COME FROM AWAY returns to Montreal !

The heartfelt Broadway musical COME FROM AWAY, presented by Evenko and Broadway Across Canada, has returned to Montreal’s Salle Wilfrid Pelletier at Place des Arts for a limited engagement running this January 10th to the 15th, 2023 !

The world still remembers the horrific September 11 attacks on the Twin Towers and Pentagon that are undoubtedly a moment of great sadness for human kind.

However, for the tight-knit community living in Gander– A small village in a rural area of north-eastern Canada, the tragedy presented an opportunity to honor the opposite: goodness, compassion, and bringing out the best aspects of humanity.

Following the attacks and the immediate closing of all of American airspace for almost 5 days, the town suddenly became the landing destination for 38 commercial passenger aircraft carrying passengers, crew and even some exotic animals like a pair of Bonobo monkeys , from Europe and around the world.

Amid the chaos, the 7,000 passengers who had nowhere else to go, were about to experience the wonders of the charming town of Gander…

What exactly do you do when a crisis occurs and you suddenly have to welcome 7000 strangers to your small town ?

Free up the schools, get much needed supplies, offer them whiskey, let them savor fish & cheese and make them kiss a cod of course !

‘Come from Away is definitely an inspirational musical tale of a community coming together to serve others in a time of need.

Hein and Irene Sankoff (creators and lyricists of the show) took the time to answer some of my questions for Gen’s Delights:

1- Coming out of a long pandemic, your touring company has surely encountered many challenges. Do you have any memorable examples of the artistic community coming together to help the show return to the stage ?

Come From Away has become a global family with productions around the world, so recently when we didn’t even have enough swings available, actors from our Canadian, Australian, London and Broadway companies joined the tour.

It felt a bit like a Come From Away Avengers movie – all joining together from around the world to make sure that this incredible story can be shared.

2- Newfoundlanders have a reputation for being awesome storytellers. What are some other defining personality traits that are uniquely Canadian or specific to Newfoundlanders?

People tell us how much they love the stories in our show, but they were even better when our friends in Newfoundland told them to us!

One of the reasons they’re such good storytellers is that they have a culture of getting through difficult winters by coming together for “kitchen parties” where everyone brings songs and stories and they come together as a community to stay warm and get through the darkest months.

They told us that they grew up knowing that if your neighbor needed food and you had some, you offered them some – because the next winter you could be in their place. And that culture of community and generosity was most clear when almost 7,000 strangers ended up on their doorstep.

3- If an event similar to 9 / 11 ever occurred again, how do you think the population would act in modern times and would it be the same or different response in terms of help offered or received ?

One of things that was different in 2001 was that barely anyone had cell phones – even the pilots – so no one was able to see videos of what happened, or communicate easily with their loved ones.

The Come From Aways barely knew where they were. So the Newfoundlanders became the ones who had to help them with everything – phones, internet, information and translations.

However, it also meant that the stranded passengers didn’t disappear into their phones – they explored Newfoundland and talked to the people around us and by doing that, they made incredible lifelong connections and memories.

4- The musical is incredibly funny, however it deals with a very real and serious tragedy. How do you find the right balance of facts and humor to present to the public and what are some of the main messages or lessons you would like audience members to leave with ?

We were living in New York on 9/11. My cousin was in the towers, but fortunately escaped. So we never wanted to create a show about 9/11 – it’s why we call it “a 9/12 Story.” It’s about the kindness the generosity that happened in response to a tragedy.

The Newfoundlanders do this so well. They’ll tell you a story that make you cry, but just as you’re tearing up, they’ll take care of you by telling you a joke. So there’s a lot of laughter in our show – and when there are tears, it’s often because audiences are just so shocked by how good people can be to one another.

That’s one of the show’s main messages – that despite everything you see on the news and on your twitter feed, we CAN be good to one another. Gander showed us that it was possible.

Performance schedule:
(The show is presented without intermission: 1 hour and 40 minutes)

For more information and to purchase tickets please visit :