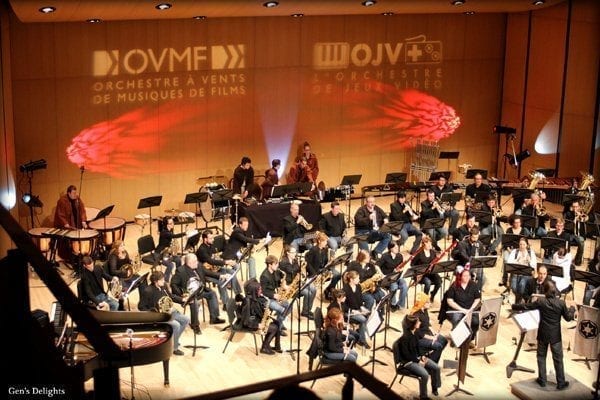 The biggest concert in the Galaxy: Final Fantasy versus Star Wars!

In a galaxy far, far away, two orchestras joined forces to organize a legendary concert bringing together all their fans!

Before the concert, eager fans could collect their pre-purchased gift CD, consisting of the compiled greatest hits of the two orchestras. Attendees could also browse through the various video game or Star Wars merchandise on sale or take pictures with the professional cosplayers fully decked in detailed costumes of their favorite characters.  I was thrilled to see a very realistic R2-D2 rolling around the lobby with his trademark whistles and beeps.

The concert itself was epic!

Each orchestra presented in turn spectacular theme songs from each series which included favorites such as The Imperial March to One Winged Angel, through the themes of Yoda and Terra with some songs accompanied by the opposing orchestra’s musicians turned choral lists !  It was amusing to see the entire percussion section dressed up as Jedi knights or the lead flutist elegantly dressed as the innocent Aeris from Final Fantasy.

After intermission, both orchestras combined into a mega wind orchestra of 85 musicians to perform original new arrangements of Jocelyn Leblanc.

This talented conductor and arranger created his own wind ensemble the OVMF in 2000 and the OJV in 2008. To date, he has written, arranged and directed more than 250 musical pieces. His talent for composition and arrangement are always appreciated and his musical career has already gained much recognition throughout Quebec.

Jocelyn’s creativity and imagination grows as he constantly works to offer quality public concerts as well as to be the director of two recognized orchestras offering original, quirky and very innovative repertoire.

Songs from:  A Link to the Past – Chrono Trigger, Super Mario World, Super Metroid, Super Ghouls’n Ghosts and Mario RPG

Songs from Doctor Who, the Simpsons, Game of Thrones, Cosmos, Stargate SGI and Sherlock