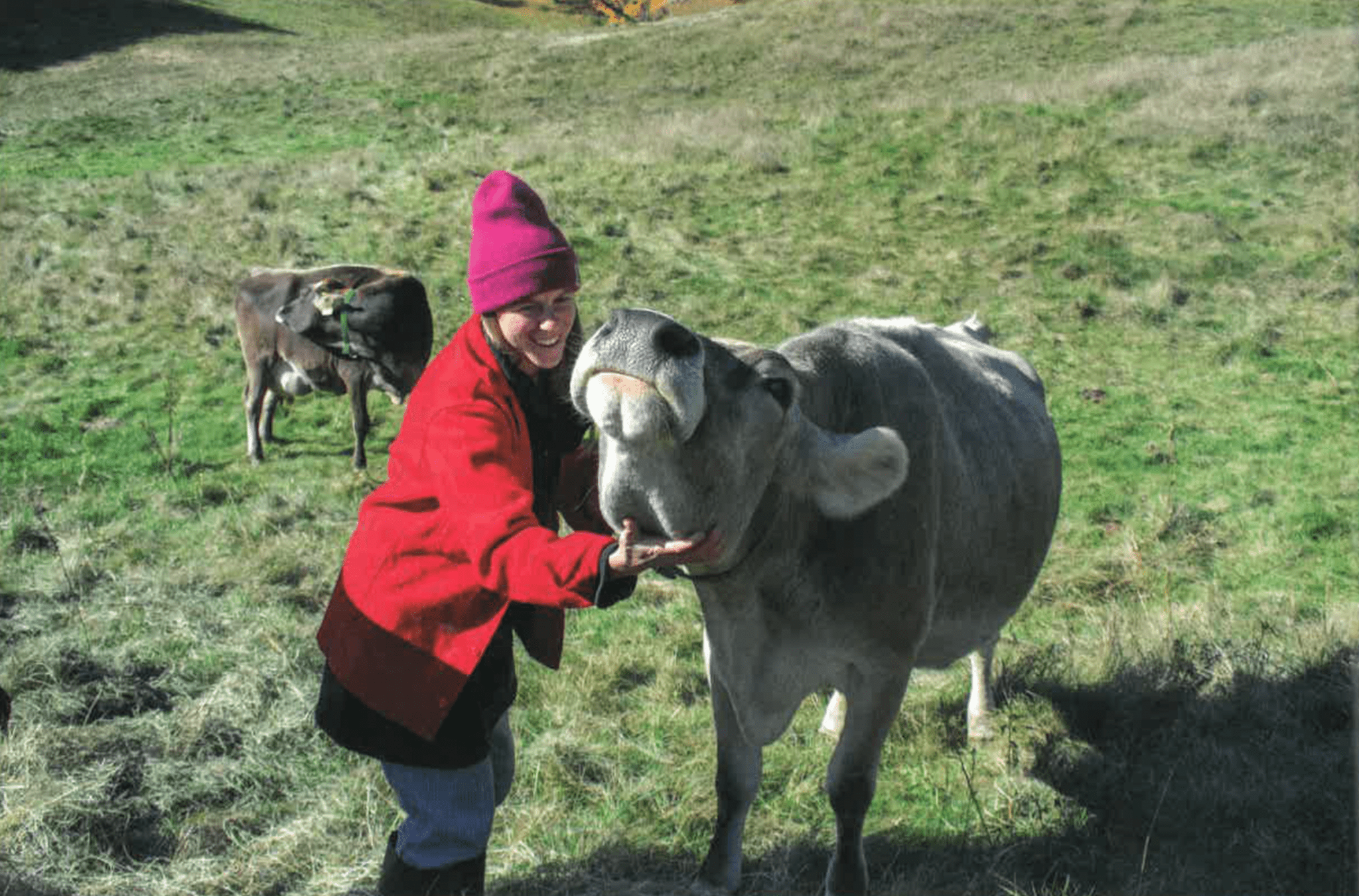 Sugarhouse Creamery is a bucolic oasis reminiscent of small dairies from the days of old. Twenty-three acres of verdant hillside pasture grasses wave and flow lazily in the breeze. Twelve Brown Swiss cows saunter about the fields, or lie in the dense greenery, chewing their cud.

Margot Brooks and Alex Eaton have been cultivating this land in Upper Jay for seven years. After meeting during their senior year at St. Lawrence University, the couple delved into husbandry together on a Vermont farm and stayed for about five years before getting the itch to start their own farm. Brooks wasn’t new to the work. Growing up on her father’s fifth-generation dairy, she was accustomed to the farming lifestyle.

While studying biology in college, Brooks became overwhelmed by the negative human impact on the planet. Determined to do something beneficial for the environment, she saw farming as a way to work a parcel of land in a positive way.

“Farming is actually a way I can take my ideals, and all these things I learned in college, and inject them back into a livelihood that is actually producing food for people,” says Brooks.

Brooks and Eaton pasture their cows and practice rotational grazing—the moving of grazing livestock between pastures as needed. Through rotational grazing, Brooks and Eaton build up the organic matter in their soil which leads to the growth of lusher grass. These flourishing fields then act as a carbon sink, effectively absorbing carbon dioxide from the atmosphere locking it away.

The years ticked by as the couple watched their soils improve and the grass grow more luxuriant from the nutrients spread about by their grazing ruminants. Dry fields of milkweed transformed into thriving pastures of plenty.

“We put our compost back on our land, we don’t use any synthetic fertilizers,” she says. “We try to think of our farm as an organism, keeping as many of our nutrients here as possible.”

Finding the perfect property took time. After looking around Vermont for a while, the couple decided that land prices were a bit high. Brooks also felt that the market for small-scale dairies in Vermont seemed quite saturated. Eventually, the couple happened upon a real estate listing two-hours away from where they’d been working. They took a trip to the Adirondacks, turned up the long gravel entrance at 18 Sugar House Way, and just like that, the search was over.

The property felt perfect for what the couple wanted to do, which was be a small-scale dairy farm. Brooks felt passionately that her cheeses should be sold where they’re made. She wasn’t interested in the idea of making cheese in the Adirondacks and driving it down to New York City every weekend. The property in Upper Jay would make her hyperlocal dream a reality. “There were multiple dwellings on the farm. We saw the opportunity for an Airbnb, which felt like it would really allow us to be the scale we wanted, but make it financially viable,” she says.

Growing up, her father’s dairy farm would ship milk out to be processed and Brooks felt that there was little connection to the end product. As she and Eaton laid plans for their own farm, they thought cheese-making would be a good way to create food that they’d feel connected to in the end. After the first two years of trying to do it all themselves, the couple, feeling a bit bleary, brought on cheese-maker Casey Galligan.

A typical day at Sugarhouse Creamery starts with 6 a.m. milking. On cheese-making days, Galligan starts at 5 a.m. The calves are fed, the barn is cleaned, and sometime around 8 a.m., it’s finally time for breakfast. The farm store, open three days a week, needs to be tidy and ready to open at 10 a.m., all on top of running two Airbnbs and raising a 2-year-old.

A second milking happens around 4:30 p.m. Their day is usually done by 6 p.m. “Milking times, just being with the cows, it’s really a soothing ritual, it starts and finishes each day. Cows have a certain energy that is very soothing,” she says.

When Brooks is feeling blue, she and Eaton know there’s always one thing she can do to reset and re-center. Her balm for a particularly rough day is to sit out at pasture and benefit from a little bovine therapy.

The beauty of small-scale dairy farming is in the relationships Brooks and Eaton form with their animals over time. Although the cows are processed for meat at the end of their productive lives, the couple has years to forge a deep connection with their cows and their land. The hours are long and the work is hard, but they find the life fulfilling.

“Those moments of going down into the cheese cave, and just getting to be with all the food we’re producing, that comes from these animals, and this land— just seeing it all the way through is so satisfying.”

DoNorth: Touring the Adirondack Coast strives to show the splendor of Northern New York’s mountains and lakes to a growing destination travel audience.

Through high-quality photography, design and writing, the pages of DoNorth inspire travelers from Montreal, New York City and Boston to use Clinton County as a jumping off point to immerse themselves in the beauty and excitement of the Champlain Valley and the greater Adirondack region.

The result of a unique partnership between the Adirondack Coast, Visitors Bureau and SUNY Plattsburgh’s journalism department, DoNorth’s pages highlight the wide array of historical, agricultural, arts and recreational tourism opportunities in the area.