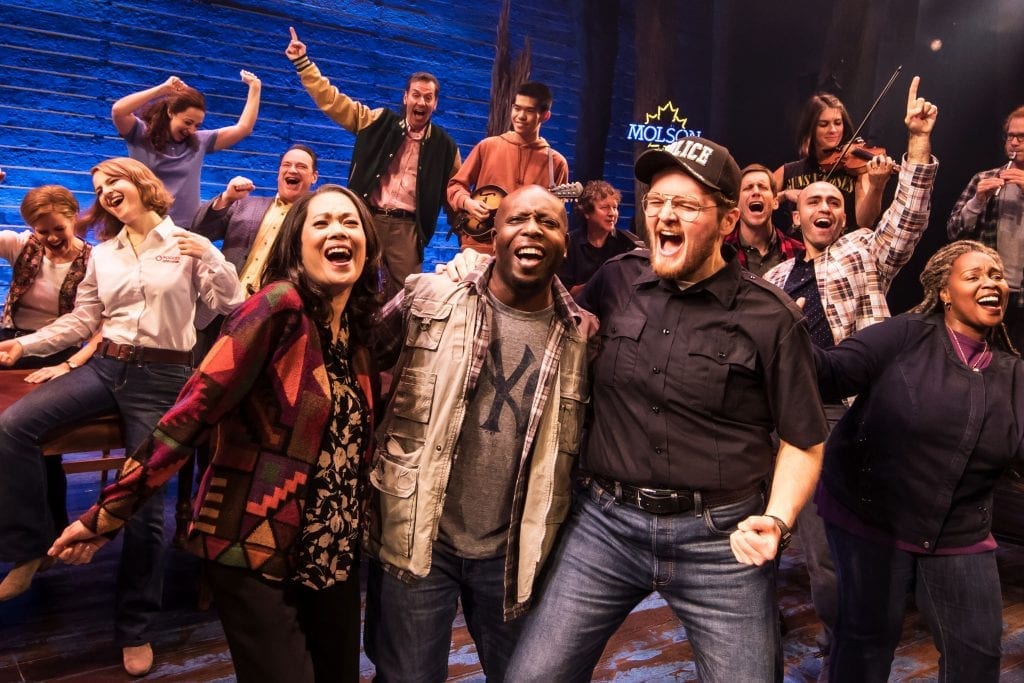 Re-examine the human spirit through a lighthearted musical, a poignant play or even a cheeky, holiday themed puppet show this week in Montreal !

This week Gen’s Delights wishes to introduce you to three bodies of work, currently running in Montreal, that shines a light onto various aspects of the human spirit, including our intellect, emotions, fears, passions, and creativity.

How a small town became an unlike hero during 9/ 11…

Canada is usually listed on some of the top ten lists for best country to live in , friendliest country or most hospitable nation.

Based on a remarkable true story, Come From Away is a feel good musical , with book, music and lyrics by Irene Sankoff and David Hein , set in the small and remote town of Gander, Newfoundland that tells the story of how this northeastern city and it’s residents welcomed with open arms and hearts about 38 planes with thousands of passengers who were diverted after the airspace closed following the tragedy of Sept. 9th 2001

In true Canadian spirit, the Gander community opened their homes, churches, schools and community centers for the almost 7000 “come from aways” and the storyline generally follows some of the personal stories and exchanges that took place during the 5 days that these strangers bonded, shared ideas, fears and dreams.

Highlights include the catchy showtune “Screech In ” that is set in a pub and consists of a welcoming ceremony that involves downing a type of spiced rum, reciting short speeches full of local jargon and litterally locking lips with a cod fish !

When we considered that our present world is seemingly fraught with division, terrorism and hate, it is heartening to see that the population of Gander welcomed all these international and unexpected guests with utmost kindness– regardless of skin color, religion or sexual orientation. This quality is woven into the very fabric of their nature — they don’t know any other way to live.

With a lively cast of 18 performers singing and acting along to music from a live band, Come from Away is an inspiring musical tale – performed without intermission and currently running until December 1st at Salle Wilfrid-Pelletier of La Place des Arts.

For more information and tickets , please visit the main webpage :

There can be no greater pain than losing a child , imagine also suffering post-traumatic stress from the grueling aftermath of serving in a bloody war and living a lack luster life in a remote Calabrian farmland in the heart of merciless winter- can you imagine a more dire scenario ? Where does one find salvation and how can the mind and soul cope?

Human misery and the struggle to find strength after a tragedy are themes explored in Jesse Stong’s new play Winter’s Daughter.  Directed by Emma Tibaldo andpresented by Table D’Hote Theatre at the Segal Centre for Performing Arts – Nov 27th to Dec 8th, the storyline, (based on David Brody’s short true story The Peddlers’ Daughter), may be simple, but the three main characters are complex as they come to terms with loss, rejection, grief, forgiveness and ultimately love.

Maria (above) , performed by Michaela Di Cesare , convinces her husband Giuseppe – a war veteran , to take in the 4 year old daughter of a passing Jewish peddler to be the play companion of their own child Rosaria. Unfortunately due to an unfortunate incident, Rosaria dies leaving her parents in a state of uncontrollable grief and turmoil…

As Stong comments “ Sometimes a second battle gets thrown at you before the first is finished and life is a bit like a storm upon which snow tends to pile up quickly.” But ultimately “the human spirit discovers new strengths when it reaches what was thought to be a limit and is pushed beyond it.”

Running 80 minutes with no intermission, the play is heightened by beautiful wintery projections, a very versatile set and thematic Italian peasant costumes.

Master Puppeteer and voice actor Ronnie Burkett is back in town at the Centaur Theatre this November and December with his fantastic Daisy Theatre cast of intriguing, hand-crafted characters – all ready to reenact Charles Dickens epic morality drama “A Christmas Carol“ with a naughty twist !

Burkett laughs, jokes, sings and one handedly breathes life into his eclectic cast of puppets, including title character Scrooge (performed by the ever wooden hearted ex Diva Esmé Massengill) who will go to great lengths to perform for her imaginary fans …much to the dismay of her submissive assistant Bob Cratchit, who has his mind set on spending Christmas with his sickly son, the ever so soft spoken and charming Tiny Tim (Schnitzel) who dreams of taking flight to the night skies.

Each in turn, the Ghosts of Christmas Past, Present and Future visit Esmé and try the best to tug at her heartstrings and convince her to change her selfish ways. Throw in an overly jolly, vegan nephew and a couple of fund seekers and you got the entire cast of the famed Holiday tale.  Of course, a bit of steamy audience participation may be required to bend even the hardest of wooden hearts…

The show which is currently playing at Montreal’s Centaur Theatre has been extended through Dec. 21st