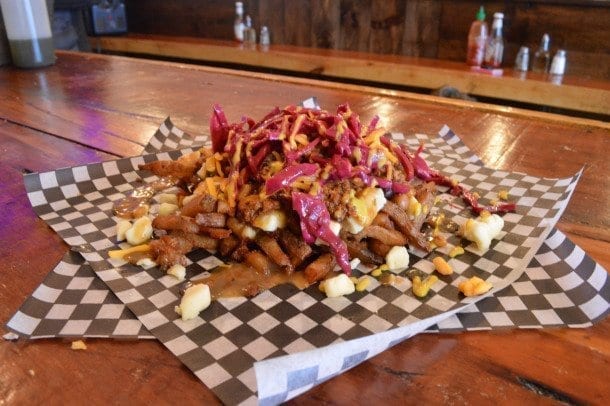 For an entire week, Montrealers have been taken over by poutine fever! The competition was fierce as 40 restaurants tried to outdo the other by offering their most creative versions of the traditional Quebec national dish of French fries covered with hot gravy and curd cheese, to an adoring public.

Winner asides, here below are some of my personal favorite ‘poutineries’ where both creativity and other interesting gastronomy perks are on offer at the establishment.

Four years ago, co-owners Camillo Fresco and Kosta Kariotakis opened their first Poutineville in the heart of the Petite – Patrie.  The restaurant offers diners the possibility of customizing their own poutines with an endless selection of toppings and fresh ingredients.  For this year’s edition of Poutine week,  they called upon their creative powers to offer The SUGAR SHACK:  A well balanced stacked assortment of traditional sugar shack offerings: Ham, an Omelette, a side order of Baked Beans and a strip of Tempura-battered Bacon all served on top of their signature “Smashed” Potatoes, complete with Curds, Gravy on a Maple Syrup doused Pancake!

I am equally glad to learn that the Sugar Shack will soon be offered on their regular breakfast menu in March 2015 !

Other combos that I found delicious were their specials, Filet Mignon with blue cheese, onions, curd cheese and pepper sauce, and their tender Braised Beef in wine sauce with smashed potatoes:

Foodgasms warning:  As one of the only poutine-alcohol combos on offer during the festival, I was equally impressed by both the taste and presentation of the Brutus poutine, the owners ingeniously served their creation in a recycled Jägermeister bottle! This simple combo of Yukon Gold fries, Gouda Cheese, Bacon, Caramelized red Onions, homemade Jägermeister and Chipotle sauce served “Flambé” was a dual gastronomic and visual feast!

***  For those who missed poutine week …The restaurant will offer their special flambé poutine again from Feb 12th  to the 14th …Perfect  for Valentines day  !!!

What I love best about Montreal variety of ethnic restaurants is their ability to adapt just about any of their dishes to suit a wide clientele. For Asian food enthusiasts, Cho is a Korean pub restaurant that served a sizzling hot, very tender braised beef poutine complete with home fries topped with kimchi, their house gravy, spicy aioli, shredded mozzarella and finished with a fresh dash of green onions and sesame seeds. The poutine was a delicious blend of flavors and spices – bitter and a tad spicy from the aioli and kimchi mix. Exotically divine !