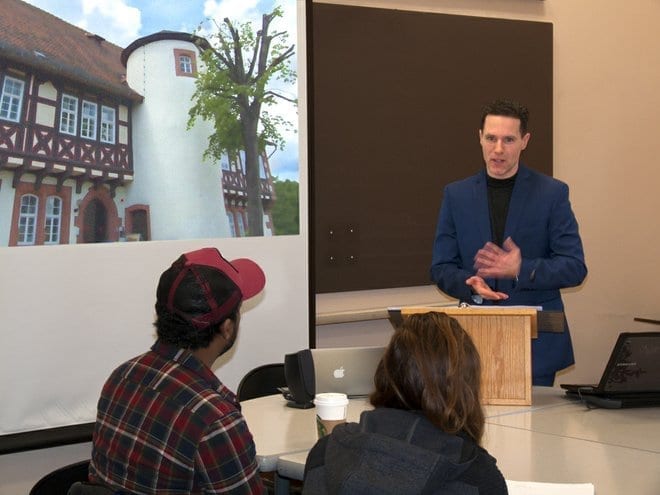 DOWN THE RABBIT HOLE… UP THE BEANSTALK… INTO HARVARD!

Thanks to everyone in the Academic Writing and Critical Reading course for being a wonderful audience! Dr. Elisabeth Sharp McKetta instructs the class. She uses fairy tales as the texts for her students to ponder. She invited me to the Philosophy Building at Harvard University, to speak to her class on the pilgrimages I make to sites associated with literature, films and live performances I enjoy.

For this occasion I aimed to create a fun, interactive lecture and multi-media presentation entitled Pilgrimage: Touching the Real Deal in a Fantasy World. It takes the audience on a journey through the writings of Lewis Carroll, the Brothers Grimm and Hans Christian Andersen, by exploring actual locations where the authors lived, including places that inspired elements of their written tales. In his tale The Tinder Box, Andersen wrote about a dog whose eyes were each as “large as the Round Tower.” He means the Round Tower of Copenhagen, Denmark, one of the world’s oldest standing astronomical observatories, which I’ve had the pleasure of climbing. I’ve also ventured into the forest where Hansel and Gretel lose their way in the famous opera by Engelbert Humperdinck, and visited a castle tea house that inspired an illustrator for his 1906 depiction of Rapunzel’s tower. Thanks to research before going, I’ve managed to avoid visiting places tourists are told have connections to famous tales when they actually do not.

One of my favorite topics centers on private places I have visited which are hard, or nearly impossible for tourists to enter. My presentation addresses the elated feeling I experience when accessing different private rooms in which the Grimm Brothers, Lewis Carroll and other literary figures lived and wrote.

Thanks to my research before going on these trips, I once managed to attract the attention of a newspaper reporter in Visby, Sweden, who wrote a two page article about the American tourist visiting their city. I was also informed by the architects behind some renovations of a Yorkshire hotel that Lewis Carroll used to frequent that they “took my suggestion” and incorporated Lewis Carroll themed artwork and informative plaques about the author’s stays in the lobby.

Students hear a story about my trek to the famous Brothers Grimm statue in their hometown of Hanau, Germany.

My lecture concludes with literary pilgrimage spots much closer to home. These include the Old Dutch Church in Sleepy Hollow, New York, immortalized by Washington Irving in his unforgettable Legend of Sleepy Hollow, and the Almanzo Wilder Homestead in Malone, New York, boyhood home of Laura Ingalls Wilder’s husband of the Little House series, and a site we’ll feature soon on Mountain Lake PBS after I fell under its spell.

I appreciated how engaged the students were during the entire hour, and I enjoyed answering their thought-provoking questions afterward. Dr. McKetta and I are now talking about other audiences who might enjoy this presentation, so perhaps I’ll bring it to a venue near you!

Dr. Elisabeth Sharp McKetta and I share a love of chidren’s literature.