The great loves are often the crazy ones.

This week, Gen’s Delights’ pick of activities are jam packed full of tantalizing tales of forbidden love, supernatural encounters and tech – filled activities that you and your family can enjoy in and around the city.

Read on to find out more …

Andrew Lloyd Webber’s beloved musical, The Phantom of the Opera returns to Montreal after a 25 year absence, thanks to Evenko and Broadway Across Canada that is currently presenting Cameron Mackintosh’s spectacular new production at Place des Arts from October 4th to the 15th at Salle Wilfrid Pelletier, starring Eva Tavares as a Christine Daae and Derrick Davies as the Phantom.

Based on Gaston Leroux’s 1910 book of the same name, the haunting supernatural story of the misunderstood musical genius who falls for the nubile rising opera star instantaneously became a rock musical sensation in 1986 when it first hit the stage. It has since captured the hearts and imagination of millions of viewers and has become an iconic pop culture reference as Broadway’s longest running show.

The fascination of the fans will continue to thrive as

Mackintosh’s latest version of the musical enjoys a stronger presentation of the original story line with spectacular new sets, costumes, inventive staging, digital graphics and fiery pyrotechnics that gives a modern audience exactly what they crave: A jaw dropping visual and musical spectacle that comes complete with the unforgettable, iconic Chandelier drop ( If you are a thrill seeker, do try and score center front orchestra seats!).

Fans will definitely notice the removal of the grand staircase during the masquerade scene in act two and also a reduction in the use of 1980’s synthesizers that make the final orchestration more mellifluous.

Taken as a whole, the greatest draw of the musical is the chemistry between the two leads. The charisma and theatrical sensitivity that Derrick Davis brings to his role of the Phantom in reaction to Eva Tavares spunky Christine is quite moving and believable, especially in the final dramatic act.

With spectacular sets, catchy songs and a stellar cast, it becomes easy to understand why over 130 million people worldwide have lost their hearts and minds to this dramatic masterpiece and Cameron Mackintosh delivers an up-dated version that is sure to please the masses.

For more information on show times and tickets for The Phantom of the Opera please visit:

The Golden Lotus – or ‘Jin Ping Mei’ – Is a spectacular contemporary ballet adaptation by famed choreographer and BDT director Wang Yuanyuan (former Principal dancer and resident choreographer with the National Ballet of China), that transports its audience into the dark, tumultuous world of sexual desires.

During the 90 minute performance, 28 dancers surrounded by lavish decors and elaborate costumes by Oscar-winning Tim Yip (Crouching Tiger, Hidden Dragon), tells the tale of the ill-fated Golden Lotus / Pan Jinlian (a Chinese Madame Bovary of sorts) who has to bear the advances and infidelities of several men including the tiger slayer Wu Sung, the high dignitary Xi Men Qin, and her humble peddler husband Wu Da, who together, drive her mad and leads to her untimely ending.

The ballet structure is told in four acts, “Prelude,” “Wu Sung,” “Xi Men,” and “Lian,” that reflects the characters’ inner turmoil with dramatic and very expressive tight choreography set to modern music by Du Wei that reflects a period of history that is unfamiliar to modern day audiences, but recognizable in its subject’s timelessness.

What really struck me during the performance was that such a powerful and sexually charged performance was delivered brilliantly from a troop that has its origins from China: a generally conservative nation with restrictive views on sexuality.

For more information on the Beijing Dance Theatre and their productions please visit:

It’s this weekend that the 10th spooky edition of the haunted village will kick off in the Village Québécois d’Antan in Drummondville.

As one of the scariest haunted villages in the province, expect a terrifying 3 kilometer length trail complete with an audacious line of activities for the whole family that include bloody actors, props and spooky decors.

The haunted village with its 26 historical buildings (including an entire church and yard) , undergoes a complete transformation where at every turn, there is something or someone lurking in the shadows  ready to pop out and scare you senseless.

In fact the village employs over 120 live actors whose sole duty is to scare you silly in each of the historical buildings that boasts a different scary theme ranging from haunted hotel, to morgue with different fright levels for adults and children.

This year the village has added an interactive, experimental zone where you can come face to face with hordes of brain eating zombies!

Although this year the village has extended visiting hours and has also put into place a reservation system to control the number of guests per night, it is almost impossible to cover the entire terrain in one evening.

I highly recommend booking your spot by calling the village in advance and also to dress appropriately for the rugged terrain and cool autumn nights.

Humanorium – A strange carnival has arrived at Jardins Gamelin this week

From October 5th to the 15th,  HUMANORIUM – curated by Ève Cadieux and Vincent Roy is a travelling art fair created by EXMURO public arts that is a participatory public art event part of KM3 (kilomètre cube), an initiative of the Quartier des Spectacles Partnership and part of the official programming of Montreal’s 375th anniversary.

With its numerous tents, fortune teller booths, curiosity cabinets filled with photographs, props, statues,  and even a shooting gallery, visitors will experience different facets of humanity and the human condition as they roam the mysterious carnival – reminiscent of a 19th century travelling fair,  concocted by contemporary artists, which makes for a very  unique artistic and sensory experience.

You will question your mortality as you step into the frightful Musée de la mort (museum of death) and celebrate the diversity of human kind in the Freak trailer.

Part travelling exhibition and part freak show, the dozen stands created by multidisciplinary artists will leave you questioning the meaning of existence. This is definitely an experience you will not want to pass up!

The Exhibit is free and open to all, however some of the stands do contain controversial or frightful imagery that may be upsetting to some people and young children. Viewers’ discretion is advised.

From the 6th to the 15th of October, visitors can enjoy free of charge a variety of twelve virtual reality enhanced films that push our sensorial boundaries.

For those who are curious about the large overhead dome that covers the S.A.T. you may also want to check out Lamparium: a multi-sensorial 3o minute animated film directed by Severine Fontaine that explores the universe of lights! 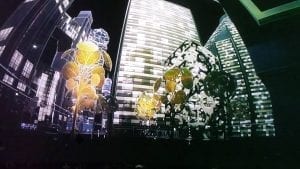 For more information on FNC activities in conjuncture with the S.A.T.  Please visit :