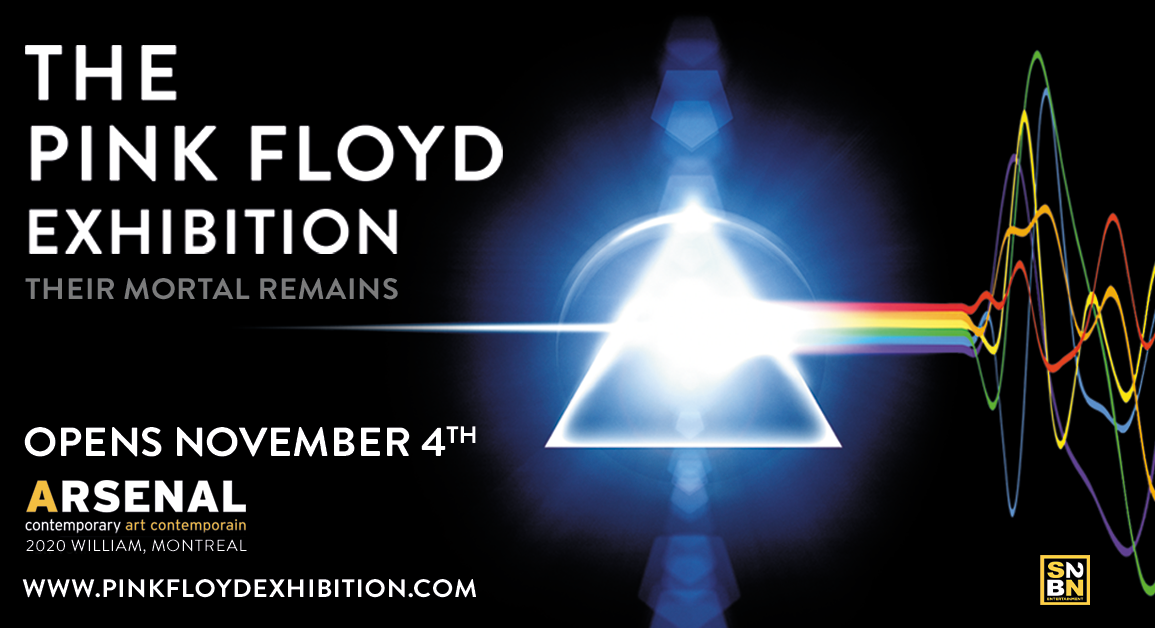 Not just another brick in the wall ..THE PINK FLOYD EXHIBITION: Their Mortal Remains, takes Montreal by storm this November !

Five years after its creation and official inauguration at the Victoria and Albert Museum, in London, PINK FLOYD Their Mortal Remains has now come to Montreal’s Arsenal Contemporary Art gallery, with their official opening this Friday November 4th 2022.

The English progressive rock band ( formed in 1965) is known as one of the first British psychedelic groups who experimented with philosophical lyrics , extended compositions and quite elaborate live shows!

Halfway between a classic walk-through exhibition and an immersive musical experience, Their Mortal Remains traces the journey of the British band, from their early musical debut in 1967 in the underground scene, their theatrical experimental psychedelic years with Syd Barrett to the trio albums of the 1990s, passing through the great era of their conceptual project albums (which were shaped by the mental instability of bassist Roger Waters) : Dark Side of the Moon (1973) , Wish You Were Here (1975) and The Wall (1979).

The decade of 69 to 79 established “the album” and “stage show” as a type of art form in itself.

The EXHIBITION features a large collection of instruments, props, photographs, music, films and original artworks and over 350 artifacts from the band’s personal archives, with a special retrospective of the band’s unique history in Montreal featuring never before seen photographs and footage.

Mason was happy to donate several personal artifacts for the exhibit including the pages of a logbook and old frilled shirts from the Ummagumma era, apparently found in the fancy dress boxes of his grandchildren!

Timed entry tickets for the exhibition are on sale now online at :

The experience lasts an average of 90 minutes.