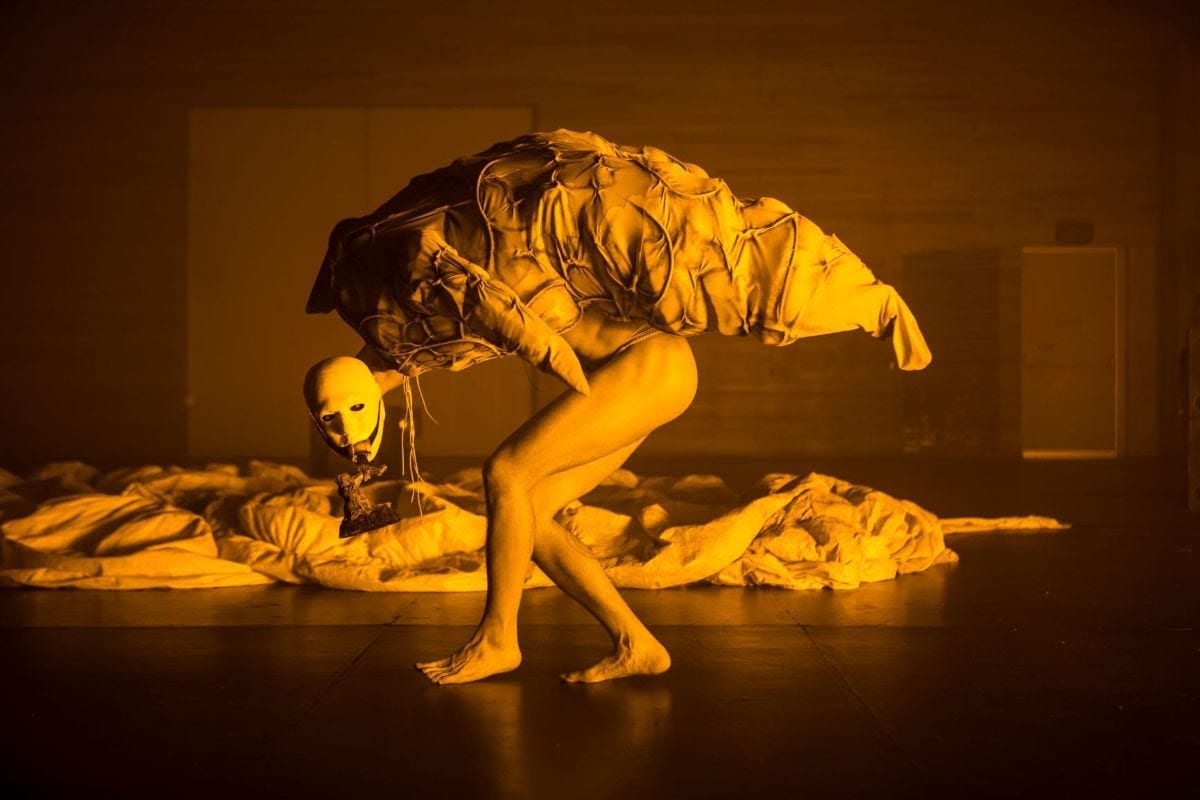 Mythical creatures are taking over the city !

Get ready mortals: the Gods are coming !

It’s the time of the year when the Gods that rule the underworld start to wake and rise.

Whether you are ready to follow a young woman’s epic journey through three vivid realms in Persephone Bound, meet and greet her boisterous musical family of Greek Gods in MYTHIC or mentally prepared yourself to come face to face with the shape shifting post-human specter Carrion…you are in for an otherworldly time !

“I am determined to be seen.” — Persephone

Persephone (aka Kore) in Greek lore was the goddess of grain & vegetation who, after being abducted by Hades, became his wife and subsequently rules the Underworld with him.

Two productions soon to be running in Montreal, pay tribute to this majestic and somewhat dark queen

Imago Theatre and Geordie Theatre in association with
The Screaming Goats Collective are proud to present : PERSEPHONE BOUND

Set to run November 15th to the 24th at the D. B. Clarke Theatre (1455 Blvd de Maisonneuve Ouest ), Persephone Bound is an epic story of survival that follows a young woman’s emotional journey through three vivid realms:

The Underworld — a college party that holds the painful memory of her experience of sexual assault;
The Court – a bureaucratic hell-sphere;
and The River (Styx) — an internal space where, queen-like, she builds a well-spring of courage and strength.

Created and performed by Léda Davies and Jed Tomlinson with additional text creation by Michaela Jeffery and Directed by Micheline Chevrier , Persephone Bound is a contemporary adaptation of the Greek Myth of Persephone, is a play that uses stunning poetry, percussion and aerial circus work to explore the need for education around consent.

*Please note that the themes/events addressed in this play are not represented explicitly and are referred to with respect to the subject matter and to whom anyone may relate.*

On a somewhat lighter note, Get ready for a Hellishly good musical time at MYTHIC – the sensational new pop/rock musical for ancient and modern times, shakes things up for its North American premiere at the Segal Centre for performing arts from October 27th to November 17th !

Explore the rocky relationship between a mother ( Demeter – Heather McGuigan) and her teenage daughter (Persephone: Julia McLellan )– a veritable living hell – since that daughter is a rebellious Greek goddess with a taste for the Underworld and the rest of the Gods that surround them are chart-topping rock stars, power-hungry politicians, and professional socialites.

Meet Carrion: a post-human spectre that has the ability to shape shift into multiple forms and speak multiple language …

Carrion is a science-fiction live performance work that elaborates a figure of multiplicity. Shoulder’s body and its collaboration with costume, light, sound and space is used to animate a series of ancestral creatures born from queer diasporic histories and imagined genealogies.

Facing the horrors of forced evolutionary acceleration, he wanders in the middle of an archaeological site and transforms himself: ghost from the West, virus, trickster, and prehistoric bird.

WHAT: The North American Premiere of Carrion
WHERE: Monument-National, 1182 St. Laurent blvd.
WHEN: Running Wednesday, Oct 30 to November 2nd 2019