Music Heals and brightens up the City of Montreal!

Music Heals and brightens up the City of Montreal!

Music is a universal language that creates ties, promotes awareness and creates beautiful connections between people.

This edition, Gen’s Delights introduces you to a few musical events that supports good causes or brings the community together for musical appreciation.

Last week, I had the pleasure of attending a benefit concert held at Centre Pierre Charbonneau organized by father daughter power team Christina and Johnny Capobianco. Along with Johnny’s Grand Show Band and guest performers such as guitarist Albe, house of Jazz’s Snooky Alston and up-coming young singing sensation Arianna Ianniciello, hundreds of attendees raised much needed funds for the Generations Foundation whose mission is “to develop and administer programs which will help improve the quality of life for persons of all ages.  http://www.generationsfoundation.com/concert.htm

For those who missed the Generations concert, another musical benefit concert, entitled Music Heals, is set to happen this up-coming Sunday with a beautiful lineup of local star performers:

On Sunday, May 28th, 2017 at 2:00 PM at the Rialto Montreal , the PKD Foundation of Canada – Montreal Chapter & Sophisticada Productions are proud to present the second edition of the “Music Heals” benefit concert in support of critical Canadian research for Polycystic Kidney Disease (PKD).

Autosomal dominant polycystic kidney disease (ADPKD) is one of the most common life-threatening genetic diseases, affecting approximately 1 in 500. It does not skip a generation. There is usually a family history of the disease and parents with ADPKD have a 50 percent chance of passing the disease on to their offspring.

Today, the PKD Foundation of Canada is the only national organisation solely dedicated to fighting PKD through research, education, advocacy, support and awareness.

Featuring over three hours of performance and 30 performers, the show hosted by Teresa Romano and Marco Luciani Castiglia, promises to be a lively event with a variety of different acts ( singers, dancers, magic, violin and opera) as well as stunning prize giveaways!

Einstein once said: “Everybody is a genius,”, “but if you judge a fish by its ability to climb a tree, it will live its whole life believing it is stupid.”

The movie Amadeus is a sumptuous bio-pic motion picture directed by Milos Forman , that celebrates the life and music of Mozart (1756 – 91), considered as one of the top geniuses of the musical world.

Often misunderstood during his short but colourful life span, Mozart’s impressive body of work has set high standards for generations of musicians who aim to master the sensitivity and technique required for his pieces.

For those who are new to classical music and who would like to participate in a unique event that democratises music for everyone, on June 2nd and 3rd at Salle Wilfrid-Pelletier of la Place des Arts, the music and life of this eclectic composer will be brought to life – presented on a wide HD screen with English and French subtitles in a spectacular concert led by conductor Jeffrey Schindler as he leads a full orchestra and choir through the unforgettable music of Amadeus Mozart  in Amadeus – an Attila Glatz Concert and Avex Classics International Production.

The movie itself is a visual gem and wonderful period piece, having won 8 Academy Awards including best picture. Having a live orchestra and choir perform the film’s soundtrack is a unique experience not to be missed!

Next Music from Tokyo (NMFT)

Celebrating its 10th edition, Next Music from Tokyo (NMFT) is back for its May 2017 tour across Canada, starting in Toronto, tonight in Montréal and then off to Vancouver.

Hosted and privately funded by organiser and anaesthesiologist Steven Tanaka, (who travels regularly to Japan to scout the best possible line-up) NEXT MUSIC FROM TOKYO is an opportunity for Canadians to discover emerging bands from a completely different culture.

The tour brings a variety of indie – underground Japanese bands to Canada who have demonstrated quality on-stage performances, musical skills, energy and creativity. 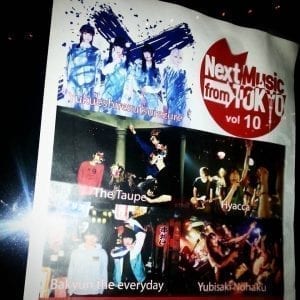 Vancouver: May 24th The Biltmore Cabaret

Gen’s Delights had the pleasure to interview organizer Steven Tanaka about his amazing musical project:

– How did you get started in the music and entertainment industry?  How does it affect your medical career?

I had zero experience in the music and entertainment industry prior to starting Next Music from Tokyo (NMFT).  Music has always played a large role in my life but I had always been nothing more than a fan.  Nine years ago in Tokyo, when I saw an underground show with eight fantastic bands (eight in one night!) it made a huge impression on me. After that, I went to another underground event curated by a friend of mine living in Tokyo named Ian Martin.  Ian owns a DIY record label, puts on his own concerts, DJs, sings in a punk band and writes about music for the Japan Times. Even though he isn’t himself talented as a musician, he is incredibly active in the scene which I really admired. I felt that Tokyo had an absolutely amazing music scene that Canadians knew nothing about so I took inspiration from Ian in wanting to do something active myself. I decided to use the wealth I obtain as an anaesthesiologist to give back to the musicians who make the music I love by giving them an opportunity to perform in Canada and show Canadians just how awesome the Japanese music scene is.

The tour was definitely stressful and an immense amount of work to carry out on my own –  having zero experience in putting on a music event, let alone a tour with five bands who have never travelled outside of Japan.  Even though my parents are Japanese, I was born in Canada and have limited ability to communicate in Japanese. Thus a simple email I could compose in less than a minute in English would take 30 min to compose in Japanese. You can imagine that bringing five bands from Japan on a tour across Canada would involve a myriad of time consuming emails. I lost a lot of sleep, but tried my best to not let it affect my medical career.

As their Canadian musical ambassador, each tour was an absolute joy to go through: exploring Canada with the bands and showing them the best of what Toronto, Montreal and Vancouver has to offer.

Having Canadians lose their minds at the shows, because the music and performances were way better than they could ever imagine is an amazing feeling.

Even though I donate an immense amount of my own money to fund this fiscal nightmare of a tour (in total almost $300,000 lost) I have had the time of my life doing these tours and have zero regrets. I make a very comfortable living as a physician. Instead of buying fancy cars or investing my money in real estate or tech stocks, I invest it into doing something I am truly passionate about and it has already given me some of my life’s best memories.

– What are some of the biggest differences you’ve seen in the Asian music business versus the North American wheel?

To be honest, I avoid major record labels like the plague and focus on bands in the indie/underground scene.  I hear stories about the Asian music business involving a lot of ass-kissing towards taste-makers and people of seniority and I try not to involve myself in any of that kind of nonsense. Japan is a land of extremes. Mainstream music business in Japan is probably even more superficial and cutthroat than in North America whereas the Japanese underground music scene is much more experimental, innovative and progressive.

– What are some of the elements of Japanese music that specifically appeal to North Americans?  What elements (musical, visual, packaging etc…) do international artists need to find success here?

Popular music in North America can be very formulaic with new bands often following the style du jour.  In Japan, a greater majority of bands strive to differentiate themselves from the pack through experimentation, being as creative as possible and constantly honing their skills. The ratio of female musicians involved in rock music in Japan is also much higher.

I believe the greater originality, quirkiness, and general level of skill is what appeals to North Americans who have become fans of Japanese indie and underground music. The much higher ratio of female musicians making technically challenging music is also a strong draw.

I would be the wrong person to ask in terms of how international artists should brand themselves for success in North America.  I value substance (music quality) so much more than style and aesthetics, whether it’s in Japan or North America.  The most popular music anywhere in the world tends to be superficial in nature, so as to have a greater chance at universal appeal.  I search out music that connects with my own personal tastes and I critically appraise music based on its ingenuity and thoughtfulness.

I think about how much time and effort it must have taken to craft a song so carefully in its melodies and arrangement to evoke such powerful emotions in me.  Most people don’t go to such profound levels when thinking about why they like a certain song and most bands I admire are too eclectic to garner widespread appeal.

I personally couldn’t care less about the popularity and success of a band and measure how good a band is only by the quality of their music and the passion with which they play their music on stage.  This is exactly how I tend to choose bands for Next Music from Tokyo.

– Do you wish to extend your invitation to musicians / bands of other Asian countries?  (Ex. NEXT music from Korea ? )

Next year I am bringing a math rock band from Taiwan named Elephant Gym. They are an incredibly skilled trio of musicians who have already developed a cult following in North America through their impressive Youtube videos. They will be the first non-Japanese band to perform in NMFT.

– What words of advice would you give young musicians / bands who dream of getting international exposure?

My advice would be not to change your style nor write lyrics in English to try and gain attention from the occidental market.  Have confidence in writing the best music you can in a way that comes naturally and from the heart.  Even if the lyrics aren’t in English, music itself is an extremely powerful language that has the power to inspire, heal and exalt.  Let the music show its true strength without watering it down to appeal to an English speaking audience. Great music can easily overcome any language barrier.

Thanks to Steven Tanaka for his time!