Montreal celebrates its 375th with flair and music !

This week Gen’s Delights proposes various activities that will brighten your evenings, bring music to your ears and leave a lasting impression:

This 17th of May 2017, you will not want to miss the historic lighting of Jacques Cartier Bridge at 9:45 pm. 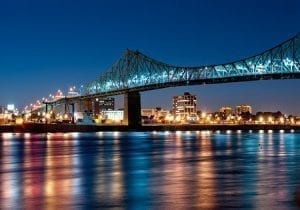 This multi-million dollar project ( produced by the Jacques Cartier and Champlain Bridges Incorporated ( with the financial participation of the government of Canada, the government of Quebec, the Ville de Montréal and Montrealers),  is destined to last for a decade with regular illumination shows starting every evening at dusk.

The evening’s accompanying musical soundtrack will feature the Orchestre Métropolitain under the artistic direction of Yannick Nézet-Séguin and a dozen Montreal artists.

For those who cannot be physically present, you can listen to the soundtrack live by tuning your radio to ROUGE FM 107.3 or by downloading the AmpMe app, which will automatically synchronize all nearby mobile devices and speakers with the concert.

The show will be symmetrical and identical for viewers on both the east and west sides of the bridge. It is recommendable to chose a good viewing spot and arrive early by foot, bus, metro (STM is offering free transport!) taxi or BIXI bike.

– The Clock Tower pier at the Old Port of Montreal,
– Notre-Dame Street, east of the Jacques Cartier Bridge
– Several spots along the South Shore river bank, including Marie-Victorin Park in Longueuil

The brain child of Montreal’s homegrown company, Moment Factory, who’s also lighting up the Jacques-Cartier Bridge for Montreal’s 375th (see above), brings Notre-Dame Basilica to life with Aura — a multi-million-dollar multimedia show  launched as part of the city’s 375th celebrations.

Before the show, visitors are invited to participate in the “path of lights” to admire and take pictures of the various lighted confessionals, paintings and the extraordinary Casavant organ which features 7000 pipes !

The three – act show ‘brings to life’ elements of the Neogothic Revival-style church’s ornate interior.  Rhythmic light patterns are shone upon the delicate carvings and painting to accentuate the basilica’s art and architecture.

The Giants are here in Montreal!

After having visited more than 170 cities in 40 countries over 5 Continents, Royal de Luxe and his Les Géants-La Grande Invitation will arrive in Montreal this weekend!

From Friday May 19th to Sunday May 21st, come and marvel at the larger than life, exquisite beings as Montreal becomes the stage for this one-of-kind encounter with these gentle Nantes giants as they roam the streets, draw crowds and highlight the vision of old and new America & Europe.

Their heavy steps will strike our imaginations, and their gentle nature will be sure to touch your hearts. 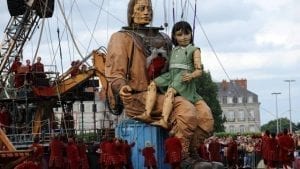 For a full itinerary and time schedule please visit:   http://www.375mtl.com/en/programming/les-geants-la-grande-invitation-36

La Bohème – Romance and Tragedy in the heart of 1830’s Paris!

Running from the 20th to the 27th of May at Salle Wilfrid Pelletier of La Place Des Arts, Giacomo Puccini’s masterpiece, La Bohème, is a four act opera with an Italian libretto by Luigi Illica and Giuseppe Giacosa that is considered one of the most beloved gems of opera repertoire.

The story is a profound observation of the fallacy of the human heart and features an ill – fated romance set in the heart of 1830 – 40’s Paris.

Well known for Puccini’s attention to details of daily life and its stunning lyrical arias—such as “Che gelida manina,” “Mi chiamano Mimì,” and “Quando m’en vò”, this opera has been performed worldwide and is always a crowd pleaser.

This 2017 version of La Bohème features Alain Gauthier as Stage director, France Bellemare as the terminally ill Mimi, Luc Robert as her lover Rodolfo , Justin Welsh as the painter Marcello and Lucia Cesaroni as the coquettish Musetta.

To celebrate Montreal`s 375th anniversary, Espace pour la vie celebrates the living with two new multimedia works Kyma (Power of Waves), and Edge of Darkness¸ that were both inspired by science and nature. 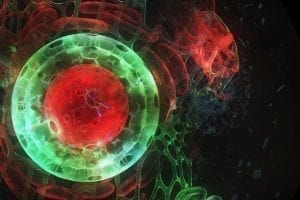 You are invited to grab a beanbag, lean back and relax under the panoramic, 360 ​​degree dome of the Rio Tinto Alcan Planetarium to enjoy Kyma: an immersive and artistic projection that deals with the science of invisible waves: found in music, light, atoms and all that surrounds us.

The result of the first partnership between Espace pour la vie and the National Film Board of Canada (NFB / René Chénier), the film was designed and directed by Philippe Baylaucq and explores the world of airwaves that brings us on a whimsical and re-energizing musical journey with original music by Robert Marcel Lepage.

Expect to exit the theater feeling re-energized and fascinated by the world of the invisible.

Produced by the American company Evans & Sutherland and adapted by the Rio Tinto Alcan Space / Planetarium team, EDGE of DARKNESS is a show dedicated to introducing you to our most recent space explorations and also offer an overview of astounding revelations about the celestial objects that inhabit the solar system (comets and asteroids) that are often invisible to the naked eye.

We follow three dramatic exploration missions by probes Dawn, Rosetta and New Horizons as they visit extraordinary places such as passing through the asteroid belt to get a glimpse of Ceres and Vesta (the largest objects in the belt).

This fascinating journey to the dark side of our Universe will be a revelation and inspiration to those who dream of uncovering the mysteries of our world.

For more information on the Planetarium and show times, please visit:

** Thanks to Michel Roy and Monica Wong for their help & input towards this article .