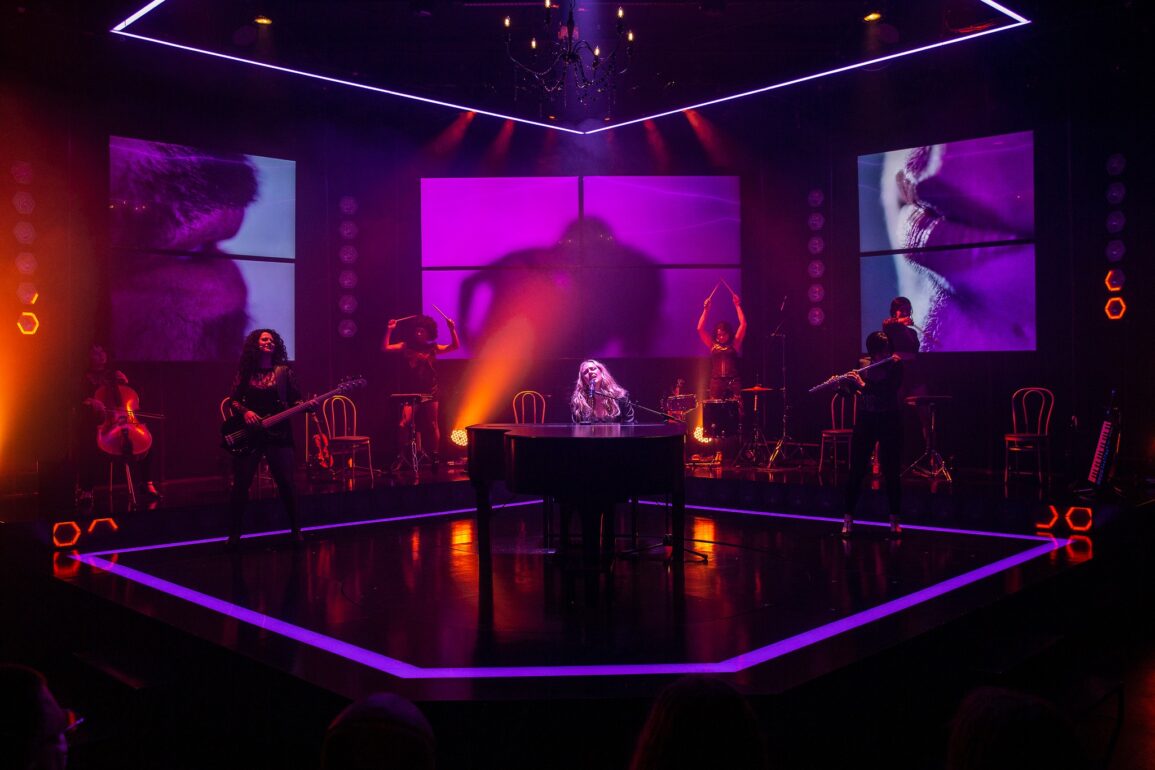 The Segal Centre, one of Montreal’s premiere destinations for world class English theatre, is proud to present a sizzling, sexy and dynamic adult rock cabaret: APRIL FOOLS, starring Eva Foote and Daniel Murphy, that is set to run from May 1st to the 22nd in their Sylvan Adams Theatre.

From the mind and personal life of “Israeli Singer of the Year” star Keren Peles, to the national theatre in Israel, then translated and launched across the world to Montreal, April Fools has had quite the trajectory already !

The piece asks the question: “What does personal fulfillment really look like?“
In the middle of living the seemingly perfect life – complete with career, family, and the home of her dreams – pop songwriter Eva begins a torrid love affair with the attractive and soon-to-be-married Daniel .

In this adult rock cabaret from Israeli superstar Keren Peles, this forbidden love affair leads to a deep dive into the singer’s mind, where a battle plays out among her conflicting urges, embodied onstage by a bevy of seductive vixens (Doubt, Libido and Confidence etc..) and her desire to break free of societal expectations.

As an added layer of participation, audience members are encouraged to keep their mobile devices on , download the APRIL app and become an active influencer over the course of the cabaret.

April Fools is a sensual and stripped-down musical rendezvous that you will definitely want to view with your partner, lover, girlfriends, or anyone who has an open mind and keen to explore their hidden deep desires…

The Montreal production and music was created by Keren Peles, translated by Shelley Ben Shachar, and adapted by Akiva Romer-Segal, with Musical Direction by Nick Burgess.

The show is directed by Moshe Kepten, and features choreography by Sean Cheesman (asst. Kelly Fletcher).

Musician and actress Eva Foote steps into the shoes of Israeli superstar Keren Peles and enjoys a sizzling onstage connection to her photographer co-star Daniel Murphy in this sexually-charged musical about fame, infidelity and female desire.

The Segal Centre invites you to participate in a unique theatre experience using your mobile device. With the help of the April Fools App you will be able to connect directly to Eva’s phone and immerse yourself into her life, see all her spicy text exchanges with Daniel and even change the course of the narrative by casting your vote !

APRIL FOOLS is set to run May 1st to the 22nd in the Sylvan Adams Theatre .

Get your tickets here : https://bit.ly/3MSG5ih

Next to Normal is a 2008 American rock musical with book and lyrics by Brian Yorkey and music by Tom Kitt.

Another trailblazer in the Montreal musical theatre field , the piece give an unflinching look at a suburban family struggling with the effects of mental illness – the mother DIANE ( played quite convincingly by Lisa McCormack) trying to cope with worsening bipolar and other mental health disorders, while managing to handle the debilitating effects her illness has on her family.

The piece explores not only the modern social ties and conventions that bind families together, but also explores the modern medical system’s treatment of mental illness with an easy access to a concoction of pills , therapy and even electrifying shock treatments.

Mental illness, is often a topic that people tend to avoid for fear of facing stigmas and ignorance from others.

The discomfort and despair of dealing with the ups and downs that come with treating mental health issues is brilliantly acted out by all cast members. For example one can’t help but sympathize with the fleeting hope that everything will be fine in the song “It’s Gonna Be Good” from ‘Next to Normal’ Act 1 sung with much gusto by Joel Bernstein as father and husband figure DAN.

Next to Normal is ultimately a show about finding light in darkness and finding love in the face of loss.

Contact Theatre aims to provide an experience by which artists, patrons and creators can be united in a communal experience that will help us all cope with our own losses over this challenging time in human history…

When the musical originally opened on Broadway back  in April 2009. It was nominated for eleven Tony awards that year including awards for Best Original score and Best Orchestration. For the Montreal production , this powerful rock musical was enhanced by the lovely voices from all the cast members as well as the dynamic performance of the 6 talented live musicians shown above who brought their energy to the performance led by pianist and musical director Giancarlo Scalia.

Contact Theatre will present Next to Normal, from May 6 – 14, 2022, at the Hydro-Québec frame box Studio within the famed Monument National in Montreal

Tickets now on sale via https://ent-nts.tuxedobillet.com/Monu….