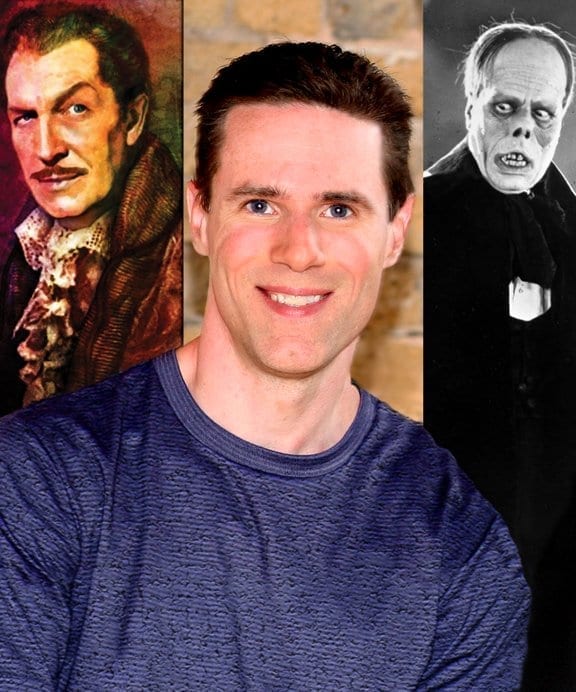 Monster Kid of the Year Walks Among Us!

Every year, as the Oscar, Emmy, Grammy and Tony Award spotlights shine on the brightest in their respective fields, the Rondo Awards honor achievements in the darker corners of entertainment, the world of classic horror movies.  People working for monster magazines, spooky DVD releases and scary movie soundtracks are the types who win the internationally-known Rondo Award.  The awards are sponsored by the Classic Horror Film Board, a website dedicated to all things Dracula, Frankenstein, and other creatures that go bump in the night.

Into this misty realm steps producer Paul Larson of Mountain Lake PBS, who has just won the coveted “Monster Kid of the Year” Award, the highest honor of the award program.  Larson, producer of documentaries and the program Art Express, won the award for his work on bonus features for the Shout! Factory blu-ray release “The Vincent Price Collection.”  When Larson heard last spring that Shout! was going to release a blu-ray set of 1960s Vincent Price films directed by Roger Corman, including many based on Edgar Allan Poe tales, he remembered a TV series he watched while in elementary school. His hometown PBS station, Iowa Public Television, had produced a film retrospective series in 1982, where Vincent Price himself had come to Des Moines to shoot new introductions for the very same Corman-Poe films.

They featured the tuxedo-clad actor in an appropriately Gothic Des Moines mansion, speaking about twelve films and his time working with Roger Corman.

“I contacted Shout! Factory first, the very night I heard they were going to create the blu-ray set,” Larson said.  “Then I contacted Iowa Public Television.  I had no idea whether the Vincent Price intros even existed anymore.  They were shot on videotape and were thirty-one years old.”

As luck would have it, Executive Producer Duane Huey called Larson, and said it was a good thing Larson reached out when he did, because Huey was on the verge of retiring and was one of the few people who might know how to locate the long-forgotten footage.  Huey had written the intros for Vincent Price in 1982.

Huey found the raw footage, and Larson volunteered to edit it back into the intros and outros as he remembered them.  Larson also interviewed Huey to create a brand new bonus feature for the blu-ray set.  “I thought the intros could use some context,” Larson said.

As for the award, “I’m completely elated about this,” Larson said.  “People are saying I saved this rare Vincent Price footage before it may have vanished. To think in 1982 I was a kid enjoying Vincent Price introducing his movies in my hometown, and now I’ve played a role in getting this footage out to a wider audience.  It thrills me!”

A “monster kid” is someone who has loved the classic monster movies since childhood.  According to the Classic Horror Film Board, the award recognizes Larson’s “efforts beyond the call of duty” to help celebrate and preserve the archival materials that help keep these creepy creatures alive. Thousands of horror fans and genre professionals around the world vote for Rondo winners in the annual contest. The award is named after 1930s B-movie actor Rondo Hatton, whose exaggeratedly brutish facial features grace the award bust, and enabled him to play a believable thug in many films.