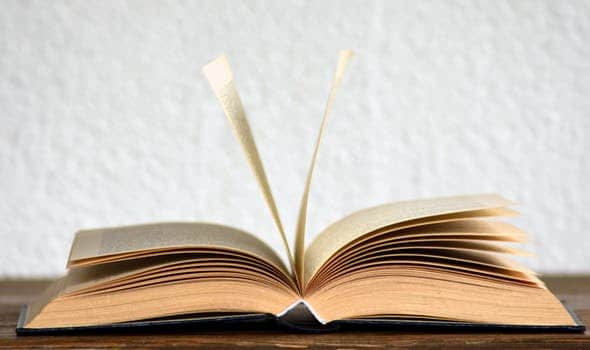 Legends, Stories and Tales in the city !

Most people enjoy listening to stories. The art of storytelling is common to almost every culture and the power of a good tale can change people’s perception of the world.

Especially around the Holiday Season, Montreal is bustling with concerts, activities and events with a good story at its core…

*** CONTEST :  Enter for your chance to win a pair of tickets to Urban Tales … See details at the end of the article

Think you know the full legend of the good hearted outlaw Robin Hood – who stole from the rich to give back to the poor?

Hollywood has recently released a blockbuster directed by Otto Bathurst, currently running in cinemas, that depicts the “legendary Hood” as Lord Robin of Loxley, a seasoned veteran of the Crusades, accompanied by a Moorish leader, who takes the lead in a daring revolt to fight the corruption of the institutions of England and regain the favor of his true love Marian.

The action is fast paced and the CGI is on point in this gritty retelling of the famed English tale of revolt in the face of corruption.

For those who wish to revisit the tale in a live-action way, next Dec. 7th & 8th,  Geordie Theatre will presents their Gala Fundraiser Production – “The Trials of Robin Hood” –a comedic spin-off of the classic tale.

Told from the perspectives of Maid Marian, the Sheriff of Nottingham and Robin himself, this hilarious telling combines three different versions into one, with three different endings, leaving it up to the audience to choose which one is true!

Co-directors Mike Payette and Jessica Abdallah, along with a cast of 38 actors (including some of Montreal’s most celebrated legal and business leaders!), will bring to life the comedic story of King Richard (played by the Honorable Jean-Francois Buffoni– Justice of the Superior Court of Quebec) who, upon his return from the Crusades, attempts to figure out what has happened in his kingdom during his absence.

Each performance is followed by a cocktail and catered reception which includes a silent auction and a raffle – all in support of one of Canada’s leading companies for Theatre for Young Audiences this December 7 and 8, 2018. 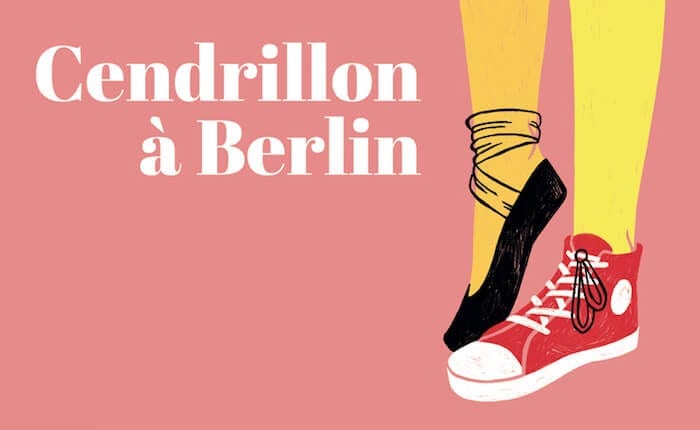 Cinderella in Berlin – Music and ballet, at the crossroads of the avant-garde and symphonic tradition!

Next December 8th at Maison Symphonique, The SMCQ invite you to their last concert of year with a touch of fairy tale magic :

The concert will also showcase the talents of young dancers from the École supérieure de ballet du Québec.

Between Cendrillon, Prokofiev’s mythical ballet, written at the twilight of the Second World War, and the fourth section of Boudreau’s Berliner Momente, strongly inspired by famous works from Haydn and Wagner, the two conductors will present orchestral music that is simultaneously avant-garde and in the symphonic traditional style.

The concert, which will bring together 100 musicians and dancers is an extremely rare opportunity to enjoy this fantastic ballet music with  live dancers and an orchestra.

The evening will end with a fresh wind with an original work from young composer Keiko Devaux, winner of the Concours de composition de l’OUM, À perte de vue . 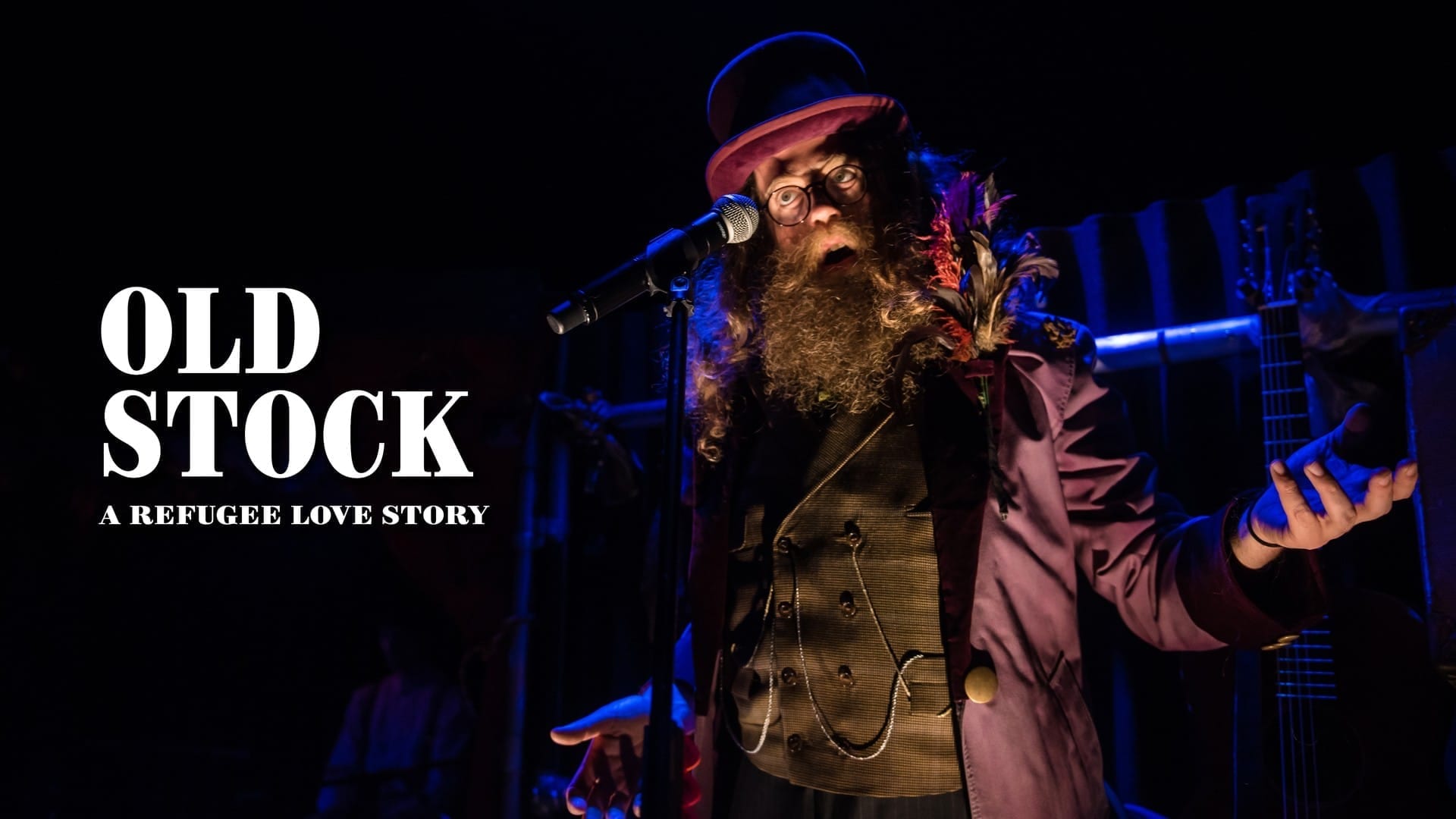 A 2b theatre company and National Arts Centre co-production.
The Segal Center in association with the St-Ambroise Montreal Fringe Festival is proud to present: Old Stock: A Refugee Love Story: a humorously dark folk tale woven together with a high energy concert.

This sumptuous Klezmer-folk music-theatre hybrid, starring the sensational Ben Caplan is inspired by the historical true love story of two Jewish Romanian refugees coming to Canada in 1908. It’s about how to love and find our shared humanity after facing the horrors of war. 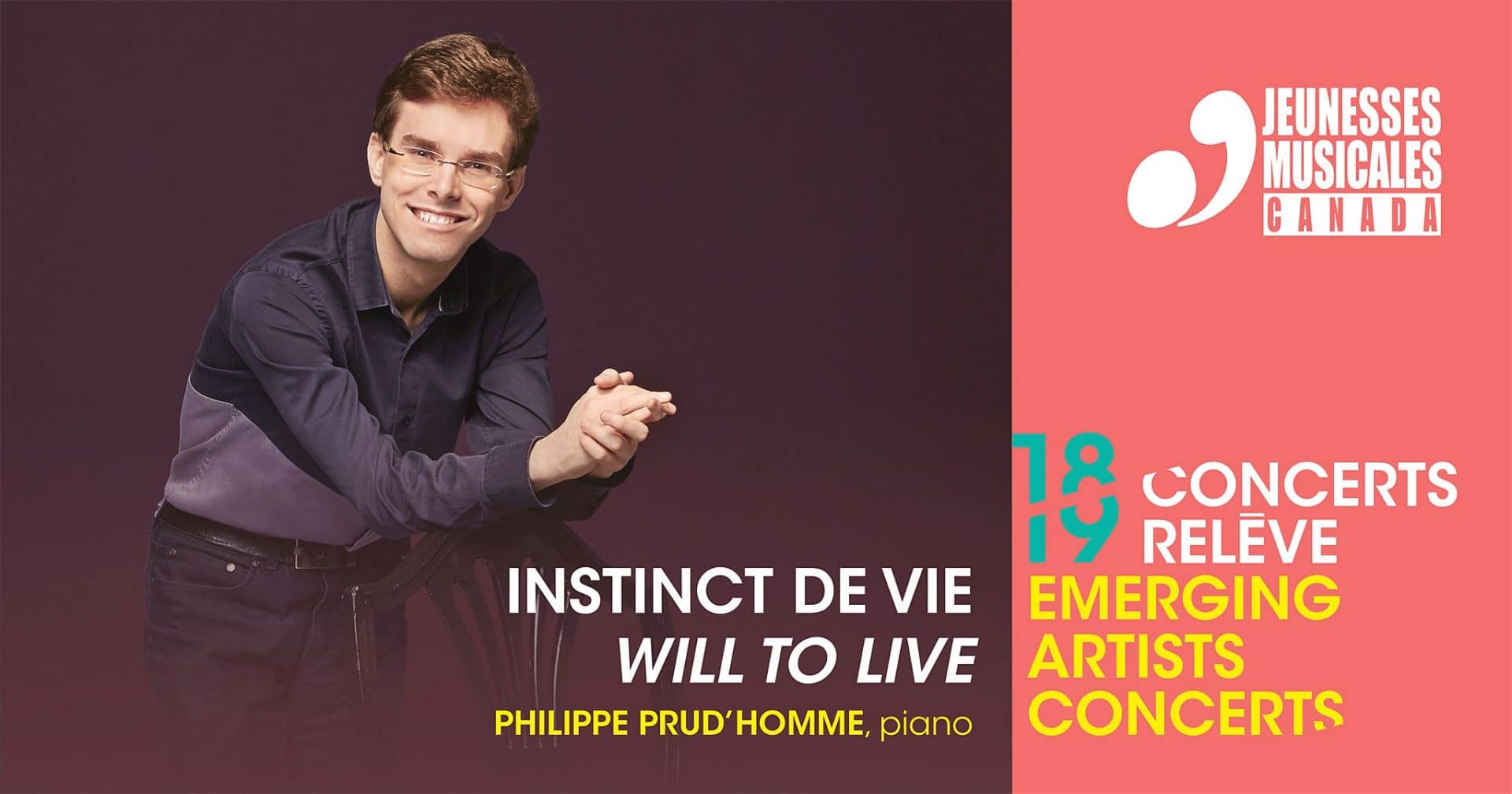 Jeunesses Musicales Canada (JMC) invites music lovers to their Happy Hour Concert series, a golden opportunity to hear the best emerging artists in the classical world in a casual atmosphere, while sipping on a glass of wine after work,

All concerts will take place at Joseph Rouleau Hall, located at 305, Avenue du Mont-Royal Est, in Montréal, just a few steps from the Mont-Royal metro station

Light always shines brightest in the dark. The audience will discover a series of pieces that are as uplifting as they are somber, and be captivated by the beauty that ensues: the sonata composed by Prokofiev after the suicide of his best friend, or Liszt’s La vallée d’Obermann, inspired by the depressed hero of a novel by Senancour. These spirited performances will allow spectators to experience all the intensity of these great works, which will be punctuated by luminous pieces by Chopin and Hamelin. Will to Live is a profoundly human concert, incorporating universal themes that are both cathartic and liberating.

UPCOMING CONCERTS in the Happy Hour Concert Series include:

CONTEST BELOW  ( see end of article for your chance to win a pair of tickets ! ) 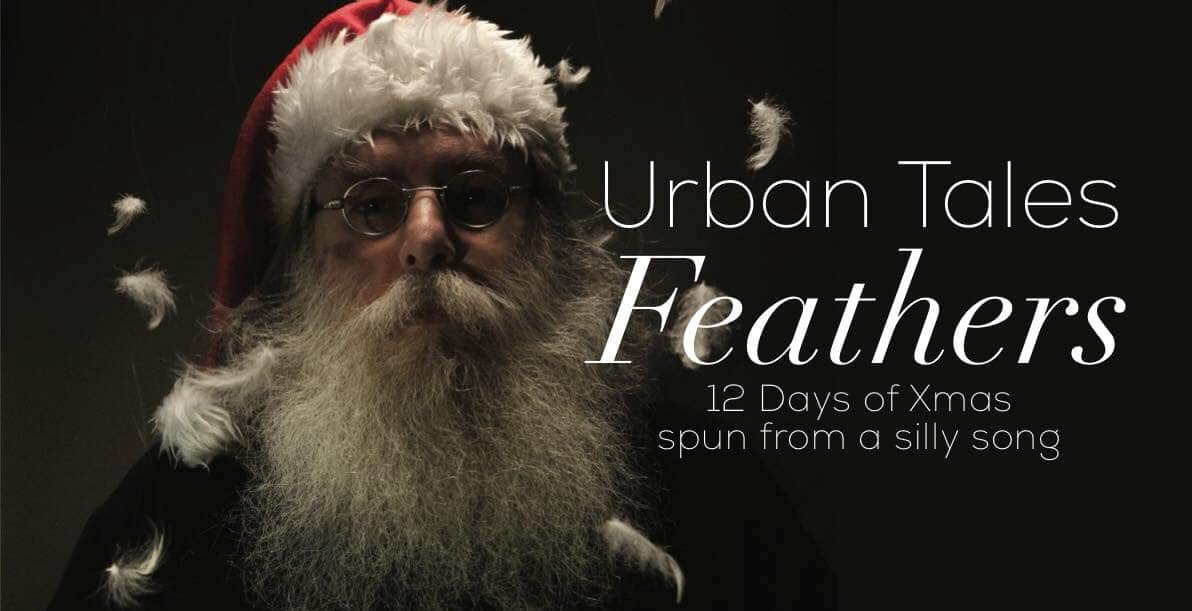 It’s THAT time of the year!

From December 7th to the 15th , (Urbi & Orbi) together with the Centaur Theatre invite you to come and hear this year’s hilarious storytelling series of rare and unusual holiday yarns, curated and directed by Montreal playwright, actor, director, and educator, Harry Standjofski, who will also provide live music throughout the evening.

Forget warm-fuzzy, innocent & white and instead delve into the world of side spitting hilarious and downright bizarre tales.

The year’s stories are:

Spotlight on Travel:  Poznan, city of legends and goodwill 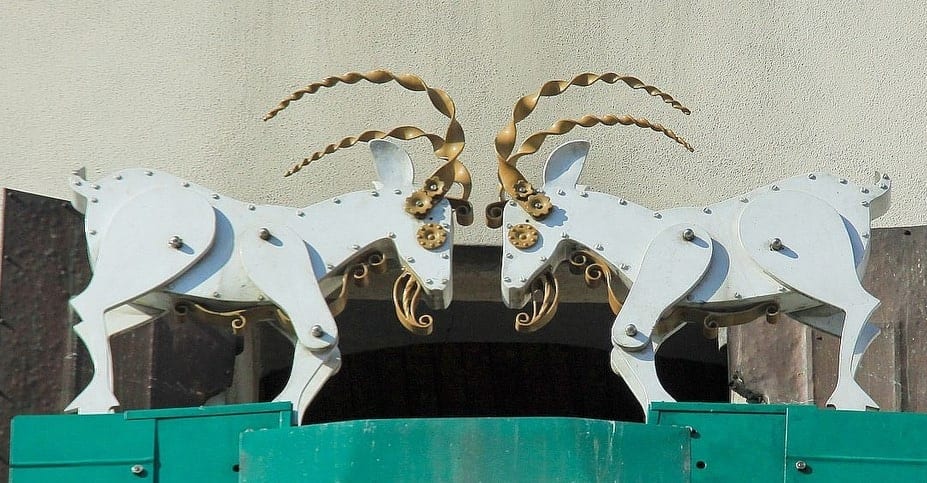 If you were to visit Poznan, a Polish city that lies on the Warta River, you will immediately notice the stunning town hall with its clock that each day at noon displays two head-butting billy goats. This mechanical marvel draws its origin from a legendary spectacle that amused the town’s mayor and pardoned a young kitchen hand named Pietrek who burnt to a crisp the town’s celebratory feast!

Poznan is a veritable city of legends, but one stands out in particular: did you know that in the heart of the city there is an entire museum that celebrates a single pastry?  Not just any pastry: the “rogale świętomarcińskie” or “St. Martin’s Croissant.”

St. Martin was a Roman soldier who noticed a beggar dressed in rags by the city gate. He cut his only prized possession – a soldier’s cape, in two with his sword and offered half to the stranger.

The tradition started in 1891, when a baker named Walenty was reminded of St Martin’s good deed by his parish priest and decided to follow suit. On the night before the fair, he saw a knight in old-fashioned armor on a grey horse with a horseshoe lying in the snow. This encounter inspired him to bake a horseshoe-shaped pastry folded over 81 times with a poppy seed filling. Next morning after solemn mass, he handed out his pastries to the poor.

The charitable event caught on and has become a celebrated event in the town’s history when every year on November 11, St. Martin’s Day, the town consumes 700,000 croissants during the annual St. Martin’s Day parade.

The feasting continues right through the Holiday season and year round as these legally protected, cultural heritage treats are now only baked in specialized confectioneries such as the Poznan croissant museum (Rogalowe) located inside of a recently restored renaissance tenement home. 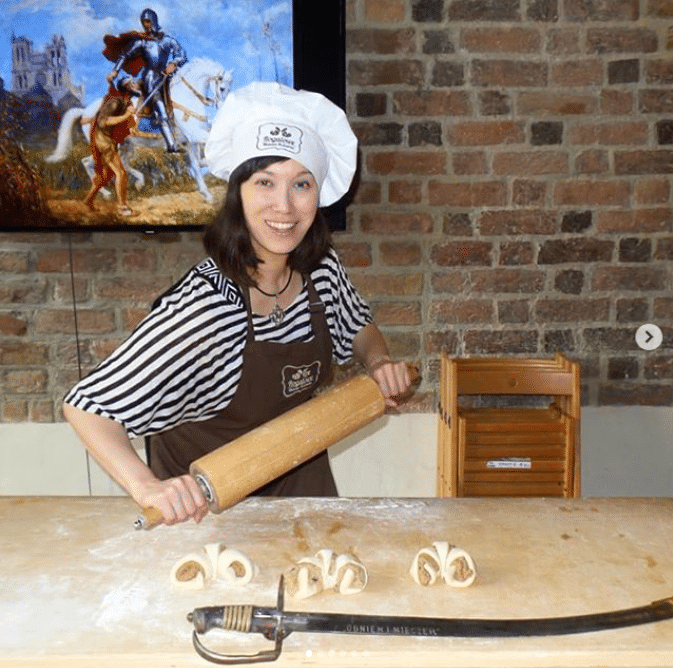 Visitors to the museum can participate in an interactive baking process where they will learn about the history of St. Martin, the croissant and baking process and receive a certificate that entitles them to bake these ‘rogals’ themselves!

For more information on the St. Martin’s Croissant Museum in Poznan, Poland

What is your favorite fairy tale and why ?

For your chance to win a pair of tickets to URBAN TALES running at Centaur Theatre  –  Good luck !