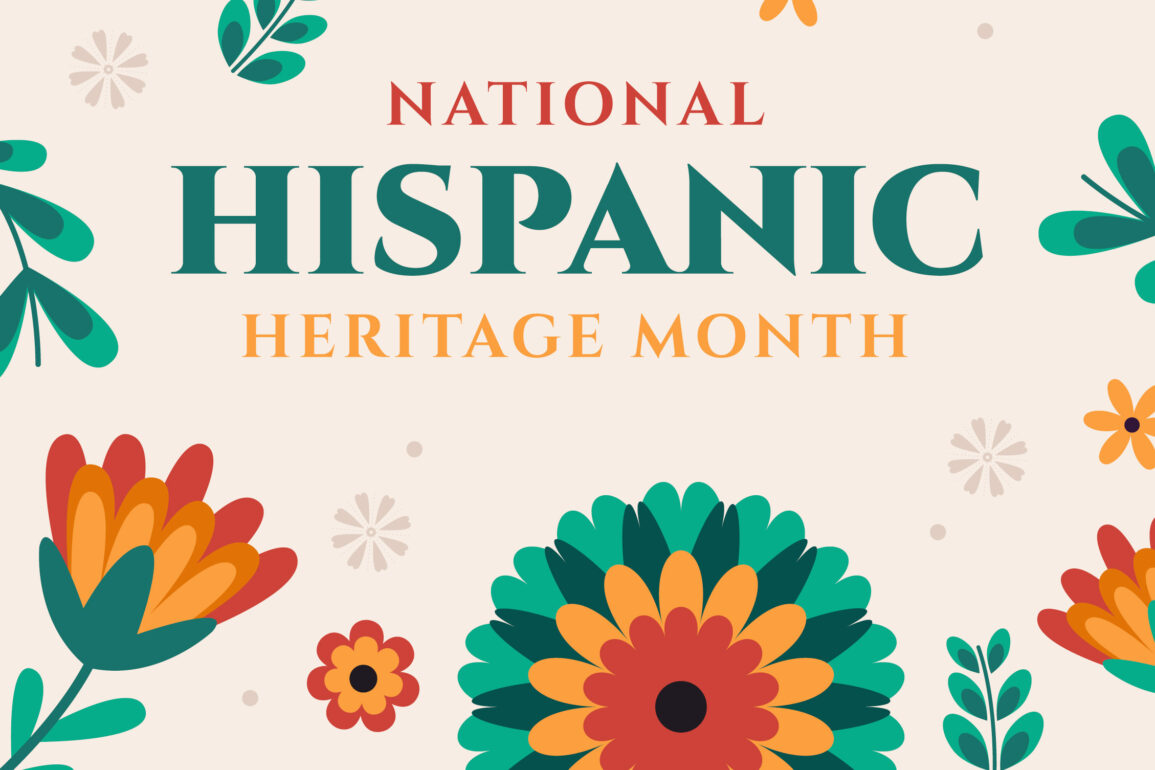 September 15th through October 15th is Hispanic Heritage Month! Celebrate the culture, histories, and contributions of Americans whose ancestors come from Spain, Mexico, the Caribbean, and Central and South America.

Across the country, Hispanic Heritage Month is celebrated with festivals, community events, and parades. Originally begun in 1968 as Hispanic Heritage Week under President Lyndon B. Johnson, it was later expanded to cover a full month by President Ronald Reagan in 1988. Hispanic Heritage Month encompasses a range of important dates, including September 15th, the anniversary of independence for Latin American countries Costa Rica, El Salvador, Guatemala, Honduras and Nicaragua. Mexico and Chile celebrate their independence days on September 16th and September 18th. And on October 12th Día de la Raza is observed by many Spanish-speaking countries and communities to honor the countries and people that were conquered by Spain and other European explorers.

Continue below to celebrate and learn about the diversity of Hispanic and Latinx cultures and histories, visionaries and leaders, and engage in timely and important conversations about social justice and allyship in America, with resources for all ages.

Grades PreK-K
Celebrate National Hispanic Heritage Month with a lesson on Flamenco! Penny and the KidVision VPK kids take a field trip to the studio to learn about Spanish dance movements and music.

Grades PreK-3
You and your child will have a blast whipping up these popular dishes from Mexico and Puerto Rico!

Grades K-5
Introduce your students to Colombian poet Rafael Pombo and his folktale “Pastorcita.” Pombo was known for his Spanish translations of traditional English nursery rhymes — “Pastorcita” is similar to “Little Bo Peep.”

Hispanic Heritage Month | All About the Holidays

Grades PreK-12
A collaborative project of the Library of Congress and the National Archives and Records Administration, National Endowment for the Humanities, National Gallery of Art, National Park Service, Smithsonian Institution and United States Holocaust Memorial Museum, the contents of this site pay tribute to the generations of Hispanic and Latinx Americans who have positively influenced and enriched our nation and society with primary documents, blog posts, videos, recordings and more.

Grades 3-12
This collection of lesson plans, videos and classroom resources invites teachers and students to explore the history, people and issues chronicled in the PBS series, Latino Americans. Along the way, it engages students in dramatic real-life stories and offers primary texts that serve the goals of the Common Core.

Books About Latinos Who Made a Difference

Grades PreK-7
From “Diego Rivera: His World and Ours” to “Sonia Sotomayor: A Judge Grows in the Bronx,” this list of children’s books highlights the histories, cultures, and contributions of Latino Americans! Many of the books are bilingual or are available in Spanish.

Grades 3-8
Migrant farm workers in the United States were exploited routinely by the agricultural industry, which forced them to work in unsafe conditions for little pay. They had no political representation or advocates until Cesar Chavez established the United Farm Workers, the first successful union for farm laborers. Watch a short video and examine two primary sources in order to understand how Chavez was able to successfully organize a movement among some of America’s poorest and most oppressed workers.

Grades 6-12
In this interview, 2015 MacArthur Fellow Lin-Manuel Miranda shares his journey to Broadway and his realization that he was free to tell stories reflecting his own experiences and community. Miranda is a composer, lyricist, performer, and creator of Tony Award winning plays In the Heights, as well as Hamilton: An American Musical, which was also awarded the 2015 Pulitzer Prize. Miranda is reimagining American musical theater in works that fuse traditional storytelling with contemporary musical styles and voices.

Grades 6-12
Learn about Jovita Idar, a teacher, journalist, nurse, and civil rights activist who grew up in Texas and endeavored to expose segregation, lynching, and other injustices endured by Mexican Americans in the early 20th century, in this video from Unladylike2020. At a time when signs announcing “No Negroes, Mexicans, or Dogs Allowed” were common in the Southwest, she helped to tackle racism, the need for bilingual education in schools, women’s rights, and protecting the lives and property of Mexican Americans. She used journalism as a form of activism to both mobilize and educate the public. She also formed and led one of the first organizations to support the rights of Mexican American women.

Grades 6-12
Students examine the challenges that three Latino Americans faced and overcame as they achieved success in their careers. This interactive lesson introduces students to playwright Lin-Manuel Miranda, actor Judy Reyes, and astronaut José Hernández through interviews from Maria Hinojosa: One-on-One. Students ultimately consider how the life experiences and achievements these individuals describe helped shape how they identify as Americans in the 21st-century United States.

Representation and Diversity on Stage and Screen | Raúl Juliá: The World’s a Stage

Grades 9-12
Despite Raúl Juliá’s talents, opportunities for Latinx actors in the United States in the 1960’s were scarce. In this series of videos from the American Masters film Raúl Juliá: The World’s a Stage, Esai Morales, Edward James Olmos and others discuss how Raúl Juliá overcame discrimination and made a name for himself as an actor — without losing his Puerto Rican accent or changing his name — breaking new ground and helping to pave the way for Latinx actors today.

Grades PreK-3
This growing set of resources from Sesame Workshop’s Coming Together initiative provides tools, sparks conversations and supports kids as they grow into allies and advocates. Recent additions include content to specifically address anti-Hispanic bigotry as well as new resources aimed at children ages two to six, like “Spanish is My Superpower.”

Grades 6-12
Try these tips for how teachers can better use their curriculum “as a window and mirror” for students and celebrate diverse Hispanic and Latinx history throughout the academic year, not only during Hispanic Heritage Month.

Grades 9-12
In this interactive lesson, students explore the extent to which society (and they themselves) may discriminate based on factors they’re not even aware of, implicit biases. In this resource you’ll learn what implicit bias is, how it influences your own thinking, and how its impact can be minimized.

Ashley, a Mexican-American teenager living in California, dreams of graduating high school and going to college. But when ICE raids threaten her family, Ashley is forced to become the breadwinner, working days in the strawberry fields and nights at a food processing company. A co-presentation of POV and VOCES, co-produced by POV and Latino Public Broadcasting. Official Selection, SXSW Film Festival.

In the projects of Watts, Meryland Gonzales, a twelve-year-old female boxer trains to be crowned the 2019 Junior Olympics champion. Meanwhile, her immigrant parents work tirelessly to give their child a shot at achieving her dreams.

2 PM: Eliades Ochoa: From Cuba to the World

Eliades Ochoa became known the world over in the late ‘90s as an original member of the legendary Cuban band, the Buena Vista Social Club. However, his passion for his country’s musical heritage led him to a life dedicated to music much earlier than that. See how the streets of Santiago de Cuba became the backdrop of Ochoa’s youth and adulthood.

2 PM: Singing Our Way to Freedom

Explore the life and music of Ramon “Chunky” Sanchez, from his humble beginnings as a farmworker in Blythe, California to the dramatic moment when he received one of our nation’s highest musical honors at the Library of Congress in Washington, D.C. Chunky’s arc of transformation from marginalized farm kid to charismatic social activist shows how one person can mobilize people to change the world.