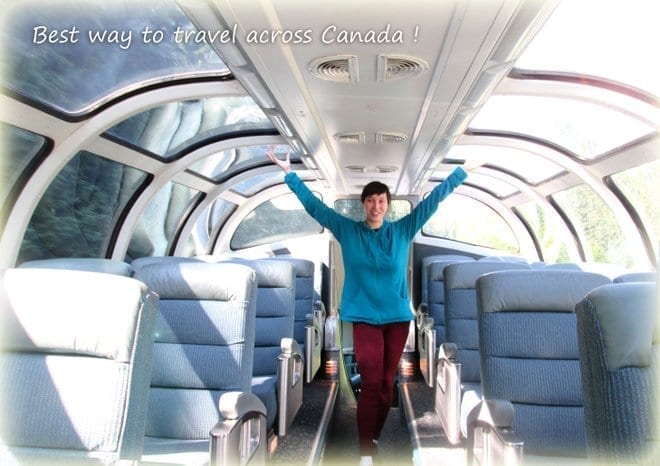 Journey Across Canada aboard The Canadian with VIA Rail

Canada is home to one of the most scenic train rides in the world!   I recently had the privilege of traveling with my adventurous co-reviewer Monica Wong to experience a bucket-list 21 day journey across Canada on Via Rail’s The Canadian.

The Canadian landscape is as diverse coast to coast as its people and Canada is home to one of the most scenic train rides in the world!

I love traveling by train.  For the inner romantic in me, trains rides have always evoked images of thrilling journeys filled with interesting encounters, delicious meals and breathtaking scenery. Compared to cars or buses, trains are safe, spacious and convenient intercity transport that takes away the stress of driving and allows its passengers the freedom to sit back, relax, and actually enjoy the view!

Last week I had the privilege of traveling with my adventurous co-reviewer, Monica Wong to experience a bucket-list journey across Canada on VIA Rail’s The Canadian. We were both traveling on CanRail Passes that allow for 7 one-way trips anywhere in Canada, in Economy class, during a 21-day period, with the option of sleeper car up-grades at additional cost.

Together we traversed the dense forests of Quebec and Ontario to the endless fields and ponds of the Prairies, through the dramatic snow-capped peaks of the Rockies, the wilderness and fishery shores of the North Pacific Coast and right into the heart of cosmopolitan Vancouver.

Here is an account of what I consider to be one of the most unforgettable and breathtaking journeys you can take up North of the border!

The Toronto-Montreal train is a rapid 5 – 6 hours journey between two of Canada’s largest cities, Via Rail offers several departure options along the Windsor corridor departing from Montreal’s Central station, Pierre Elliot Trudeau Airport and even a few departures via Ottawa which allow flexibility and a safe arrival at Toronto’s downtown Union station.

Passengers have the option to select between budget travel in Economy class, or opt for the added convenience of priority boarding, a delicious meal and beverages included in the price of a Business class ticket. Both options offer a relaxing ambiance, attentive service and free Wi-Fi.

Some interesting stops along the way include Gananoque & the 1000 Islands, Port Hope and Cobourg, both lovely towns offering cute shops and 19th century flair and midway point Kingston, with its impressive downtown.

It takes a spectacular 4 days to reach Vancouver from Toronto with VIA Rail’s flagship Transcontinental,  The Canadian . Trains depart year round from Union station on Tuesdays, Thursdays and Saturdays and crosses over the evergreen woods of Ontario, the endless fields of the Prairies and the Canadian Rockies with interesting Capitol city stops along the way !

I would quickly like to dispel the notion that boredom might settle in during the trip. Agreed there is no Wi-Fi or 3G for a major part of the journey, but this opportunity to relax, unplug and actually connect with fellow passengers and Mother Nature is quite therapeutic for most of the travelers. My favorite daily activity was admiring the view atop the panoramic car or just hanging out, chatting and listening to live music in the lounge car. VIA Rail often collaborates with young musicians who entertain guests cheerfully at intervals along the way.

For those traveling in Touring class, being in a Sleeper or Sleeper Plus car entails that you have priority boarding, all your meals are accounted for and you have access to showers, amenities, free snacks and various magazines and newspapers.

Private cabins, single beds and double deck sleeping berths are available in both Château and refurbished Manor cars.  Passengers can reserve a table seating during one of the 3 dinner services. Four delicious three course dishes (which are never repeated) are available and impeccably executed and served by a skilled team of kitchen staff and versatile waiters. To my delight, I have noticed that Via Rail has made an effort to provide local specialties from various provinces like Saskatoon berry chutneys in the Prairies as well as offering local beers and wines from Ontario and B.C. I also enjoyed the VIA chocolates that our cabin attendant would leave on our beds.

Socializing with other passengers at your table and admiring the stunning scenery and geographic diversity that unfold before your eyes, is in itself an interesting topic of discussion to have with those around you. Another interesting topic is how hard it is to actually keep track of time as when you’re heading west, the train moves forward while time moves backwards, which can be somewhat confusing.

The Canrail pass is the perfect choice for people who want to go a long way on a limited budget. However for those choosing this option for the four day stretch, it would be wise to note the saying that:

“The journey is just as much part of the trip as the actual destination”.

We noted a lot of families traveling with young children in economy class and the noise levels can at times reach high levels. It is also important to note that delays do occur on the main line as freight trains have priority over passenger cars. Economy passengers do not have access to showers or beds – which can be quite uncomfortable for long stretches.

My best advice would be if possible, to break up the journey with a stopover in either Winnipeg or Edmonton. For those who chose to complete the four day stretch in one go, I found it interesting how passengers have come up with several creative ways to stay comfortable including twisting seats around and raising leg rests to create make-shift “beds”.  Bringing a pack of wet wipes and your own small picnic is also highly advisable. Hot water is available at all times, however passengers do not have access to microwaves. The on board staff are generally accommodating and are happy to offer cookies, coloring books and films to keep the young ones occupied. Hot drinks and snack are also available for purchase in the lounge car and you are always welcome to join the Touring class for the delicious three course lunch and dinners at an addition fee.

Points of interest along the way include capitol cities Winnipeg and Edmonton as well as smaller towns such as Kamloops, Hornepayne and Sioux Lookout.

If there is one trip that will make you realize just how majestic and diverse Canada’s landscape is, this scenic day train ride is the ideal trip for you.

Rich in First Nations culture and history, the route covers great stretches of wilderness, lakes and mountains that are sometimes punctuated by rustic settlements, farms and pulp mills along the way. The trajectory mostly follows the Fraser and Skeena River that eventually culminates into the serene fishing port city of Prince Rupert – end of the rail line and gateway to the Pacific Ocean coast.

This three day journey includes a mandatory overnight stop in Prince George, the largest city in northern B.C. Guests are advised to book accommodations in advance as the train usually pulls into the station quite late in the evening.

Touring class passengers can enjoy three standard pre -packaged meals a day and a glass or two of complementary wine while sitting in the plush seats of the panoramic viewing car with extra large windows. Apart from the amazing view of Jasper National Park and the Rockies, what made this trip most memorable for me was the amazing service manager Chris and J.F. his assistant. Both men and their crew delivered exceptional service to all passengers in both Economy and Touring class by giving out pertinent information on various cities we passed, surprising us with a couple of magic tricks and performing hilarious short comedy skits to keep everyone entertained. Believe me when I say that I will never see tunnels the same way ! Passengers lively exclamations of joy fueled each time we sighted a black bear, moose, wolf, horse, eagle and various other wildlife outside the cars, made for an unforgettable journey.

Points of interest along the way include the city of Houston home to the World’s Largest Fly Fishing Rod , Seven sisters peaks, Moose Lake and  Mount Robson the highest mountain in the Canadian Rockies

Doing a cross-country trip aboard The Canadian as well as the scenic Jasper – PrinceRupert line was definitely a unique, eye opening experience that I encourage any nature and history lover to add to their bucket list .

For fares, schedules and more information about the Canadian and other cross Canada train journeys please consult the main VIA Rail’s website.

—Thanks to Monica Wong for photos and co-reviewing.