On the Program are two pieces by First Nations composers, Barbara Croall and Tomson Highway, as well as beloved Spring themed classics from Piazzolla and Vivaldi.

Some Say a Rose from The (Post) Mistress – song by Tomson Highway, arrangement by François Vallières, with mezzo-soprano Julie Boulianne

The Four Seasons – A. Piazzolla, with violinist Marc Djokic

Marc Djokic is the winner of the 2020 ECMA Classical Recording of the Year, the Mécénat Musica Prix Goyer, a Prix Opus from the Conseil québécois de la musique, and a former Instrument Bank recipient from Canada Council.

As one of Canada’s most prolific violinists , Djokic is also OCM’s current concertmaster.

Thanks for taking the time to answer my questions for Gen’s Delights Marc ,

1 .   Numerous musicians have enjoyed their own take on the Four Seasons over the years; From Moe Koffman’s Jazz album, the French Swingle Singers to the fiery rhythms of Piazzolla… What are some of your favorite derivative works ?

The first two works that come to mind are the Four Seasons Recomposed by Max Richter and the “American” four seasons by Philip Glass which I performed years back with Melanie Leonard and the Sudbury Symphony Orchestra. While the Richter version quotes rhythms and melodies from Vivaldi’s Four Seasons, the Glass version is a completely unique and original work with out any quotes from Vivaldi. Both of these works are definitely worth a listen if you haven’t heard them already.

What characteristics or imagery of Spring come to the forefront of your mind while performing? Do you visualize certain passages in a unique way ? Any funny or quirky images?

It is true that musicians will visualize a variety of images and acts in order to give the music for life. Think of an actor getting into character before hitting the stage or the set. The exception is the thunderous violin solo with blazingly fast triplets in the 1st movement of spring. Although it represents thunder and rain, I have to channel my inner Eddie Van Halen as he would have been inspired by this section for the conclusion of his famous solo, “Eruption” which also features ascending / descending triplets. There’s not much else you can do in that solo but throw your violin up high and shred it like you wrote it. Oh, and thunder and rain!

Vivaldi as a composer was also an improviser. Do you feel Piazzola’s order inversion affects the overall heart and soul of Vivaldi’s piece ?  What do you like about the arrangement ?

I can’t really talk about Piazzolla without first mentioning Leonid Desyatnikov who was the composer who made this fantastic arrangement for violin and Orchestra. Although Piazzolla did eventually put the seasons in this alternate order, Desyatnikov took the mixup one step further by taking direct quotes from Vivaldi’s four seasons and inserting them into  different seasons. I don’t think the order of the seasons is too important since each of Vivaldi’s seasons, although short in length, are separate concertos. Take last Thursday for example, we had a hot summer day right after winter, although that was kind of strange. Interestingly, Piazzolla’s original version that he played with his band didn’t quote Vivaldi although it really did stand out as a great Four Seasons.  I like that band members solos were included in Desyatnikov’s version including a great solo played by pianist Pablo Zeigler in Invierno Porteno. Piazzolla got his start in the bands, so it’s great that we hear some inspiration from some of the other members of his group.

Thanks to Marc for taking the time to answer my questions and looking forward to your performance ! 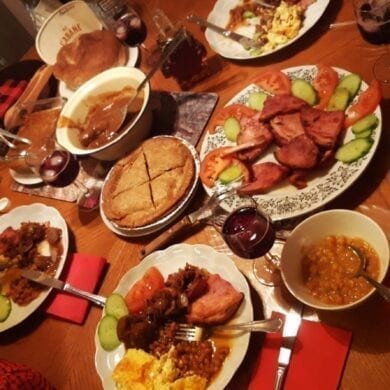