Harpists aim to change your mind about their instrument

“Pentacle,” composed for two harps in the 1920s by Carlos Salzedo, is not only a challenging piece for the harp duo Lilac 94 to play, but it also challenges audiences as they hear sounds they never expected a harp to make.  Christina Brier and Kathryn Sloat of the duo Lilac 94 are striving to master the difficult piece, which many considered radical when it was composed the ’20s.  It still sounds unusual to many listeners in the 21st century.

“Spotlight” producer Paul Larson spent the day with Christina and Kathryn in Saranac, New York, interviewing them and recording a rehearsal.   In the “Spotlight” segment, the musicians say they hope to release the first complete recording of the difficult Salzedo piece.  They performed it live for the first time in Saranac this year, as artists in residence of Hill and Hollow Music. 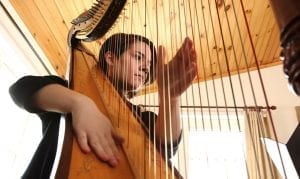 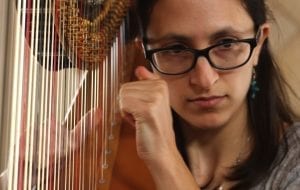 “Spotlight” is brought to you, in part, by the Glenn and Carol Pearsall Adirondack Foundation, dedicated to improving the quality of life for year-round residents of the Adirondack park.