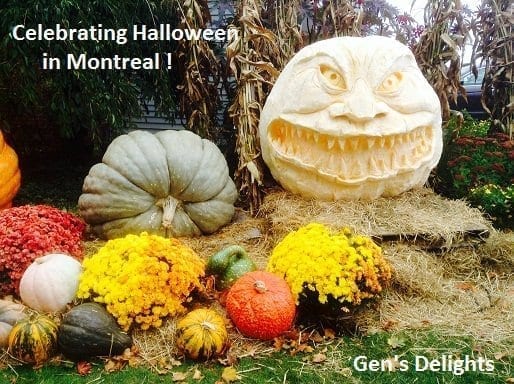 FUN ADULT activities to do this HALLOWEEN in Montreal!

In just a few day, thousands of kids will be taking to the streets in colorful costumes (expect to see traditional ghost, witch and vampire attire replaced by a lot of Disney Frozen and Superhero costumes) going door to door and joyfully shouting Trick or Treat!

For those of us adults who may or may not have young children, but who still wish to partake in the Halloween frenzy or are just looking for something new and interesting to do, here is my list of top things to do this weekend:

Every weekend from October 4th to November 2nd, including the evening of October 31th  , La Ronde will host its terrifying Fright Fest where vampires, ghosts and zombies will walk freely among the park’s various attractions. This year La Ronde will also have four haunted houses and a Zombie Camp that will await visitors young and old for Halloween Fright Fest. During the day time there are numerous activities for the whole family, including entertainment with Ribambelle and friends who welcome toddlers at the Little Pumpkin Patch. When night falls, its officiallyTerror time and the park will becomes a frightfully entertaining place. With over 100 incredibly disguised entertainers and dozens of liters of fake blood!

Sign up for a ghost walk or hunt and you’ll never see Old Montreal in quite the same way again. Follow an experienced guide as they make you discover old legends, and sighting grounds:

Cost: $140 (including taxes) for the private guide service of 2 hours. Gratuity at your discretion. Group of 12 maximum

3. Gardens of Light and Great Pumpkin Ball at Botanical Gardens

An annual event at the Botanical Garden, young and old can take a stroll among the hundreds of dazzling Chinese lanterns, stop by the Great Pumpkin Ball, with its ever-popular pumpkin-decorating contest and meet Esmeralda, the friendly witch, and her clever magic spells!

Cost: Same price as admission to the Botanical Garden.

4.The Rocky Horror Picture Show at the Imperial Cinema

Let’s do the TIME WARP again !!!  Come join the madness this year, at the Rocky Horror Picture Show 2014! The classic musical will be screened at the gorgeous and newly restored Imperial theater with a simultaneous live cast performance. Experience first hand an annual tradition that brings together an enthusiastic costumed crowd and talented actors that will draw you into the realm of Sci-fi, glam-rock, and sensual daydreams to treasure forever. Although the film is rated PG, I would recommend the show to Mature audiences 18+, Don’t forget to bring your props ( Toast, water guns, newspaper and toilet rolls! ).

The Young  OSM Ambassadors Club  is pleased to invite you to its next event to be held on October 31 as part of the OSM concert :The Phantom of the Opera. Attendees will enjoy a VIP evening at this concert where you can relive an impressive art form almost forgotten today! Organist William O’Meara will improvise a soundtrack to the silent film the Phantom of the Opera ! This will undoubtedly be a unique experience perfect for celebrating Halloween !

Cost: Various prices according to shows

Curious about trying a new restaurant but cautious about breaking the bank? To all the Foodies out there, your dream festival has arrived! From October 30th to November 9th , taste the best of what Montreal has on offer. Presented by Wines of France, Montréal’s third annual restaurant week features savoury affordable set menus in 140 restaurants city-wide.

For those interested in learning new culinary tricks or participating in a workshop, try attending a Global’s savoury guided walking tours! Four different circuits led by experienced and knowledgeable guides, VDM Global Culinary Tours are designed along the lines of a 5 à 7, or an über-stylish happy hour, where foodies can come together and let the good times roll! They are, without question, the best way to TASTE MTL! Bon appétit!

Where: 140 locations around Montreal.