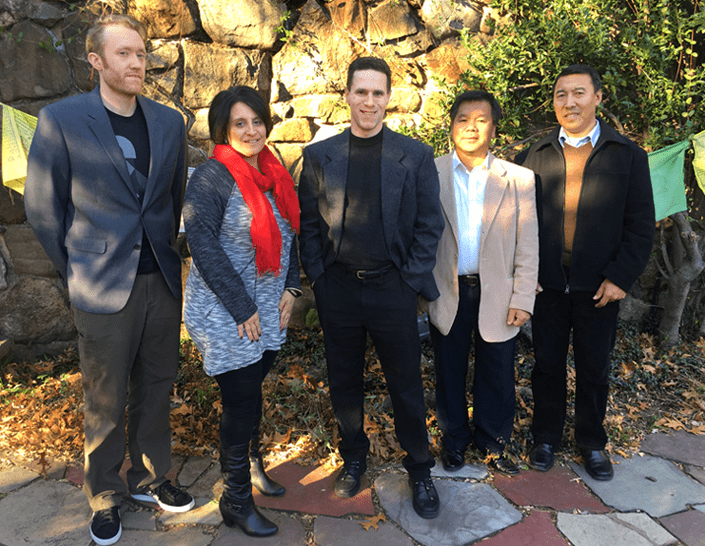 A Mountain Lake PBS documentary is sharing the story of a successful festival in Plattsburgh, New York around the state, the country and the world.  The film Arts in Exile: Tibetan Treasures in Small Town America had its New York City premiere this week at a Tibetan Museum.  Airings on PBS stations across the country will follow.

Arts in Exile producer Paul Larson and editor Michael Hansen presented the film to an audience at the Jacques Marchais Museum of Tibetan Art on Staten Island on Sunday, November 13.  Larson introduced the film and participated in a lively panel discussion afterwards, joined by Hansen, and two artists featured in the film, thangka painter Tsering Phuntsok and wood carver Tashi Dholak.

“I’ve enjoyed sitting in theaters before in New York City when directors or film experts have spoken at a screening,” Larson said.  “I was excited and humbled to accept the invitation to speak about the film. It’s an honor for Mountain Lake PBS to be invited to share our work with this audience.”

“The viewers were engaged, and a few suggested university groups who may be interested in hosting more screenings,” Larson added.  “Also, a high official in the Tibetan community of New York City said the film nearly moved him to tears at the end.”

“The North Country is full of creative people and inspiring stories. This premiere is one of many great opportunities we have to share that with a much larger audience,”  Hansen said.

Arts in Exile chronicles the creation of the Tibetan arts festival held last year in Plattsburgh, exploring how the city was moved by the culture of Tibet from across the globe.  The documentary examines how several Tibetan refugees tackle the global problems they face and keep their culture alive, armed with the arts.

The film features insight from Tibet House President Dr. Robert Thurman, and the talents of photographer Sonam Zoksang, who owns a Tibetan store in Lake Placid, freedom singer Techung, who lives in Lake Placid, and many other visual artists and performers.

The prestigious screening at the Jacques Marchais marks another honor the film has received, after it won an Emmy award for “Outstanding Documentary” in the Boston/New England Region, and a New York State Broadcasters Association Award.

This month, PBS stations across the country will have the chance to show the film to their viewers as well.  The National Educational Telecommunications Association (NETA) has picked up Arts in Exile for distribution to stations all over the U.S.  It will have its first national broadcast December 25, on the World channel.

Small audiences of Tibetans in world capitals such as London, Paris and Berlin have also seen Arts in Exile, thanks to screenings organized by Tenzin and Yangchen Dorjee, who own Himalaya Restaurant in Plattsburgh, and who helped coordinate the Tibetan arts festival.  The Dorjees say they have plans for higher profile screenings in the future.

The Arts in Exile by Mountain Lake PBS documentary is one component of the 2015 Festival of Tibetan Arts &amp; Culture of the Adirondack Coast.  The festival, organized in part by the Dorjees and SUNY Anthropology Professor Amy Mountcastle, included performances by the Adirondack Youth Orchestra, an exhibition at SUNY Plattsburgh, and the creation of a tile mural led by artist Sue Burdick Young and the Plattsburgh Renewal Project with support from the Strand Center for the Arts. This festival was funded, in part, by the New York State Council on the Arts with the support of Governor Andrew Cuomo and the New York State Legislature.

This multi-partner, collaborative community initiative was envisioned and facilitated in large part by Janine Scherline, Director of Development at Mountain Lake PBS, who also served as the grant writer, through the Regional Economic Development Council Consolidated Funding Process.

“This documentary skillfully tells the story of this year-long multi-partner initiative showcasing the unique ability of the arts to build communities, and at the same time explores how one small community can be impacted by a global issue as large and distant as the Tibetan diaspora,” Scherline said. “I hope the project and film will inspire communities to discover their unique connections to the world at large.”