With the sun shining this weekend and tons of fun activities in the city, don’t you wish that summer would never end?

This week Gen’s Delights proposes a few amazing outings and a coffee themed Passport that will be sure to set your heart racing !

With all the amazing technological advances in the electric car industry, it is not surprising that speed fans have turned their attention to electric car racing.  Formula E, officially the FIA Formula E Championship, is a class of auto racing that uses only electric-powered cars.

The inaugural championship was held on the 13th of September 2014 in Beijing, featuring 20 all-electric racing cars. The event was backed by celebrity owners like Leonardo DiCaprio and A-list teams and expert pilots who helped to boost the event’s reputation as being a worthy rival to the best world championships.

This Saturday the third season of this street racing series ( a Canadian first ) will conclude with two races in the streets of Montreal along the shores of the Saint-Laurent River.

The family friendly site will have a line- up of exciting activities as well as being an excellent mixing ground for those who wish to learn more about electric vehicles.

What’s in a name?” is presented as part of the official program of Montréal’s 375th anniversary celebrations in collaboration with Just for Laughs.

An up-beat comedy by Matthieu DeLaPorte and Alexandre De la Patelliere, the show will have you roaring with laughter

Two couples and their childhood friend come together to celebrate a quiet and very casual dinner party  – all goes well until fast talking Vincent reveals what he and his wife plan to name their unborn son.

Revealing family secrets, historical anecdotes and general chaos soon ensues as friendships and relationships are tested and prodded to extremes. Who knew that a name could stir up such mayhem?

The detailed, realistic set designed by Olivier Lamderville was enhanced by the gradually fading daylight lighting designed by Robert Thomson.

This hilarious comedy that hits the stage of the Segal Centre for Performing Arts until the 30th , also closes the Segal’s 2016/17 season.

*** For those interested, there will be Deaf and hearing ASL interpreters for the show on July 29th at 8pm. Discounted tickets are available HERE.

For those who want to partake in joyous Italian-themed festivities (cooking classes, demonstrations, contests and concerts), while enjoying a great glass of vino or trying a sweet cannoli or two, I invite you to visit the Italian festival which will welcome thousands of participants in the heart of Little Italy on St-Laurent Boulevard, stating August 4th .

Some of the 2017 highlights include: 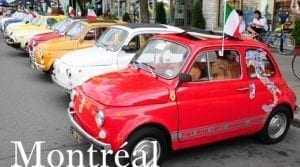 *** Mountain Lake PBS is a media sponsor of this amazing festival.

For more info on the festival please visit: http://italianweek.ca/en/main-events/

With its 21st edition in full swing, the Fantasia International Film Festival was  proud to receive, for the first time ever, American actor Robert Pattinson (Twilight, Cosmopolis) , Who accompanied directors Ben and Joshua Safdie (featured in picture below with Festival Programmer Mitch Davis) for the North American premiere of the movie GOOD TIME last July 27th at Concordia University’s Hall Theater.

Another US celebrity to grace the festival is actor Matthew Gray Gubler (Criminal Minds series)- a festival regular who returns from three years ago after introducing LIFE AFTER BETH and SUBURBAN GOTHIC. He will be attending the Canadian premiere of 68 KILL this year on Saturday, July 29 at 10:10 pm at Concordia University’s Hall Theater.

For more information on venues, ticket prices and up-coming events and guests, please consult their Website

Discover 32 Indie Cafés in Montreal with the Barista Passport

After the success of their popular microbrewery passport, Restomania is proud to launch its Barista Passport that allows coffee and tea lovers to discover local specialties at a fraction of the cost!

An experience rich in flavors, the Passport offer the opportunity to discover some of Montreal’s trendiest cafés throughout the summer season, by offering a wide selection of products (espresso, cappuccino, iced coffee, latte, tea, etc.) in the 32 participating establishments until November 30th 2017.

Priced at only 15$ on their website, this offer makes the perfect gift for someone special or even just to treat yourself!

Restomania is also currently offers passports for Sangria and Wine lovers tastings on their website.

Do quench your thirst for knowledge by checking out Restomania’s website for more details:  http://www.restomania.ca/