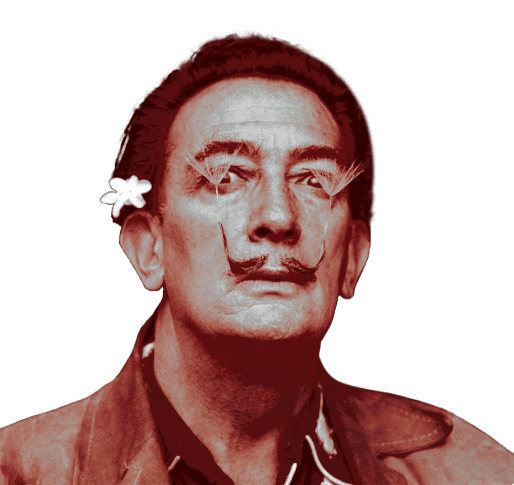 DIVINA DALÍ: a surrealistic exploration of the literary world of Dante’s Divine Comedy from Hell to Purgatory to Paradise through 101 works of art.

Starting from the 16th of July and running until the 31st of October, art and literature enthusiasts visiting the DIVINA DALI exhibit at the Port of the Grand Quai of Montreal will be able to visit three worlds and admire 101 original illustrations depicting Dante Alighieri’s epic masterpiece “ The Divine Comedy“, as well as a scene from an Alfred Hitchcock movie, all beautifully illustrated from the master of surrealism Salvador Dali !

Salvador Dali – a Spanish Surrealist who had up until the 1950’s led quite the deviant lifestyle and had openly rejected religion in his past— was quite the surprising choice of artist to be asked to illustrate Dante’s “ Divine Comedy“, in commemoration of the poet’s 700th anniversary.

The three part journey, depicting Dante’s passage through fiery “Inferno“, mountainous “Purgatorio” and finally “Paradiso“, guided by the ancient Roman poet Virgil, is considered one of Italy’s national treasures, a poetic work embraced by both Italian cultural institutions and the Roman Catholic Church.

Over the course of several years, Dali produced a series of 100 watercolor illustrations to accompany the full-text Deluxe edition of Dante’s masterpiece.

However due to public outcry over the somewhat heretic lifestyle of the superstar painter – the Italian government eventually canceled the project.

Dalí persisted with his illustrations and self- presented them in Paris – thanks largely to a renewed exploration of his native Catholic faith, a desire for mysticism / redemption and the artist’s personal affinity for Dante….

Now the complete series is on display, here in Montreal , presented by La Girafe en Feu at Montreal’s Grand Quai

Master of surrealism , #SalvadorDali (1908-1989) speaks an artistic language that touches a wide range of people. His work has the power to spark the imagination and transport you to far reaches of your mind… Just like his literary counterpart Dante with his Divine Comedy – there is a lot of room for interpretation.

The exhibit curated by #RaynaldMichaud and imagined by Félix Bélanger (featured above) showcases 100 pieces from Dante’s Divine comedy with accompanying ambient soundtracks.

Unlike Inferno ( Hell) , Dante finds the journey through purgatory to be a step forward towards self-realization: having to climb a towering mountain before reaching paradise helps to promote intellectual, cultural and spiritual elevation. Dante climbs and sees the fog at the top of the mountain. All the drab clouds that clung previously to his mind dissipates and he frees himself from the confusion his previous human life offered…Everything becomes clearer and clearer until he reaches the top where a forest of all-encompassing light awaits: Paradise … A kind reminder that humans are not doomed to darkness, but devoted to light and love.

Visitors wishing to ask specific details or learn more about a particular etching can ask for precisions from one of the knowledgeable on-site guides such as Jean-François Lapointe ( above) who was kind enough to point out that the 100 original watercolors prints were produced using the ancient Japanese technique of wood engraving with ink transfer – with Dali using over 3500 individual blocks/ matrix pieces to create the series !

Each illustration was painstakingly authenticated by Frank Hunter, the Director of the Salvador Dalí Archives.

In this exhibition, one can also admire Cloud, a grandiose, striking painting by Dali dating from 1944 from his collaboration with Alfred Hitchcock.

WHEN AND HOW TO BUY TICKETS?

Visitors are able to purchase their timed ticket online on the Divina Dali website : divinadali.com