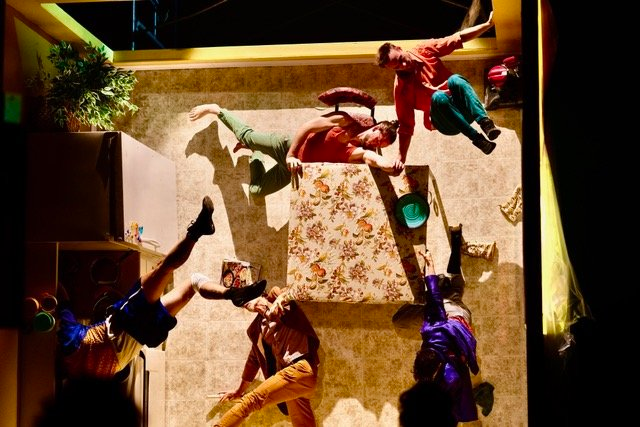 Imagine entering a dark room at which’ center lies a semi demolished car with overhanging bicycles and other random props that appear to be frozen or suspended in time.

As the lights slowly shine upon the vehicle, you notice several random bodies scattered all around the floor and also hanging out from the windows… It must have been quite the hellish night that these young people have experienced… What could have possibly led them there ?

It is through circus acts, theater and dance, that we enter Brigitte Poupart’s new show, “Until we die” that is currently running at Arsenal Contemporary Art gallery in Montreal until Sunday Nov 13th 2022.

“The world has encountered a catastrophic and destructive force.The city is deserted. Everyone is suspicious of others except for a few foolhardy people who want to celebrate in spite of everything and who, by all means, manage to get to an underground party. The audience follows the actions of the characters that relive in reverse the events that led to the cataclysm…|”

This mesmerizing multidisciplinary play is articulated in several chapters that will take place at different times.

Commencing with the first tableau, a spacious waiting room with a large overhead projector, where audience members feel a certain anxiety in waiting, but can also grab a cold beer at the bar.

The action then shifts to the main theatrical room where different scenes of the narrative occur in 360 panorama, some defying gravity and certain actions taking place overhead from the 30 foot high ceilings!

Some of the actors take pleasure in interacting physically with audience members and vice versa. The action can occur up-close right in front of you or from a distance on a staged set in one of the corners of the room . Either way, the mise-en-scene and pacing of the piece are excellent.

Finally, a joyous and exuberant finale is held where the spectators are invited to participate in a festive party (with an optional flash mob sequence) and to continue their evening by dancing to the electronic beats of a live DJ, right in the heart of the sets.

Until We Die is produced by Transthéâtre in collaboration with Arsenal Contemporary Art. Directed by Brigitte Poupart with Geneviève Lussier producer.

Brigitte Poupart originally invested in the circus world when she first directed Luzia for Cirque du Soleil. She finds the world of circus to be very poetic and has thus included it into her own, equally dark and glittering, personal cosmos.

“Until we die” lighting was designed by Matieu Roy, the sound designed by Jacques Boucher. Hugues Letellier is the set designer. Cédric Quenneville created the costumes and Mélanie Belisle the make-up and hair.

The choreographers are Dave St-Pierre and Marie-Ève Quilicot. André Langevin is the technical director whereas Mathieu Grégoire is the acrobatic designer.

The original music score was composed by Alex McMahon.

Developed with the support of the National Arts Centre’s National Creation Fund.