Cultural Diversity is embraced in Montreal

As North Americans, we are privileged to live in a society that pronounces itself cosmopolitan, encourages intermingling with other cultures and learning about differences. The belief that there is richness in diversity is truly embodied here in  Montreal.

This week Gen’s Delights introduces you to a few culture oriented organizations and various activities where the potential to learn from others is strong and community, cultural diversity,  and acceptance are key components.

Armed with delicious traditional almond paste snacks and spiced crepes, during the first part of the evening , guests were whisked away to the rhythmic beats of beautiful, traditional Arab-Andalouse music produced by AMAM’s live orchestra with singers dressed in colorful ‘karakoo’ traditional costumes.

The second half of the concert was more folkloric at its core as Kamal Berranen and his orchestra invited attendees to the front stage to dance and celebrate Arab and Berber culture.  (Berber refers to an ethnic group native to North Africa west of the Nile Valley and part of West Africa.)

The Friends of Montreal Andalusian Music (AMAM) is a group of Montrealers that share a passion for Andalusian music – which has its origins over four centuries ago on the Andalusian side of Spain. Members of the orchestra wish to cultivate their passion for music and share it with others.

To participate in future activities and learn more about AMAM and their up-coming concerts, please visit: http://amamandalous.org/

For those who dream of warm destinations, aqua blue stretches of water and sunny tropical breezes, Tahiti is the ultimate, Polynesian haven!

Last week, at the Salle de l’Ermitage in Montreal, lovers of music and dance were invited to witness the beautiful sounds of Polynesia as the group Tamari’i no Tahiti proudly presented their annual Tahitian dance show filled with rich colors, emotions and Polynesian warmth. 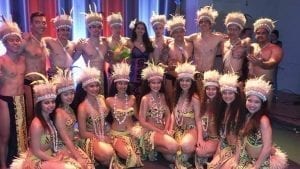 Their energy infused show featured a live orchestra and 45 energetic dancers that were eager to share their love of Polynesian culture and music with all in attendance.

This Friday, the troupe will have the honour to participate in the great ball of the French CCI (Chamber of Commerce and Industry) on the theme “Discovering  Tahiti”.

For those wishing to join next year’s activities, the troupe welcomes beginners to advance dance students under the supervision of Aurélie Felez.

How to Disappear Completely: A universal story of life, death and Identity.

Written and performed by : ITAI ERDAL

Presented in the Studio of the Segal Center for Performing Arts from April 30th to May 21st 2017.

In this original creation, award-winning Jewish lighting designer Itai Erdal blends personal life and performance in offering a poignant testimony to his deceased mother in the form of a theatrical enactment with lights, sounds and video projected images.

The acting is raw and the story poignant. We follow Itai to Israel where he flies to spend the last months with his mother, Mery, as her body slowly deteriorates from terminal cancer.

Throughout his reenactment, Itai illustrates the mother-son relationship in a very intimate way, which culminates when his mother requests help from her son to die on her own terms…

Combining powerful story-telling and the creative magic of stage lighting, this play is an unexpected lesson in inter-generational differences, loving, healing and finding the light.

http://www.segalcentre.org/whats-on/upcoming-events/segal-theatre/how-to-disappear-completely/
About the Segal Centre for Performing Arts

The Segal Centre for Performing Arts is a not-for-profit theatre company dedicated to nurturing, producing and presenting original interpretations of popular classic and contemporary works, new Canadian musicals and engaging productions with universal appeal as well as showcasing the best professional artists from Montreal and beyond.

Driven to connect members of the community, the Segal Centre has expanded to become a nationally recognized venue for the performing arts with a focus on creation, innovation, diversity and cross-cultural collaborations.

« ILL », a body of work that strikes the imagination

Technology and culture influence each other.  While a culture can create a technology, on the other hand technology can either influence or create new cultures.

Photographer Jérôme Bertrand re-examines the human body for his very first exhibition, entitled “ILL“, which will be presented May 10-16, 2017 at Erga Gallery at 6394, boul. Saint-Laurent to Montreal.

The idea of ​​this exhibition first came to him following a serious car accident that left him severely injured. While in the hospital, he observed first hand that technology has invaded our current medical environment.

In his series of photographs, Bertrand tackles the cult of technology and the myth of improving the human body. It features individuals treated with technological implants in an empty space with an artificial, medical aftertaste. The characters in his series are static, devoid of feelings, frozen like models.

Inspired by mythological iconography, his characters take up poses that reflect ancient aspirations of humans to rise to the level of statuesque, perfect bodied, immortal Gods

Jérôme Bertrand uses Photoshop to retouch his photos. His imposing models of enhanced human becomes a stirring reminder of a future that is not too far away…

Bed and Breakfast: Moving from a big city to a small town can cause quite a stir !

Real-life partners Mark Crawford and Paul Dunn star as Brett and Drew, a Torontonian gay couple who inherits Brett’s aunt house located in rural Ontario. The couple has to make a life changing decision to leave their urban apartment in order to start converting the inherited residence into a running B&B for the next tourist season, all the while trying to find their place in the community.

The talented duo shine as they play dozens of male and female characters that interact with their daily lives and that constantly test the couple’s resolve.  It becomes interesting to see how some characters are easily identifiable by their verbal tics such as the numerous “I don’t know” of Brett’s cousin or the deluge of “Sorry’s!” of the local coffee shop owner ( on that note, Canadians DO have a stellar reputation for being extremely polite).

The on and off stage homosexual relationship that the two leads share is ever more poignant as we witness their struggle with discrimination and being the victims of hate crimes:  we know they have to face the same fears and dangers in real life. When we witness the couple take a strong stand , we can’t help but feel engaged and moved.

Complete with excellent acting from the two leads, the play is fast paced, cleverly written and whose overall comedic tone is purely heartwarming. The comedy helps bring depth to the story that sends important messages about diversity and acceptance.

Faced with a different culture, it is up-lifting to see how Brett and Drew fight back for their rights, adapt to their new surroundings and finally come to call their new place < home > .

This Friday will mark the second edition of Montreal Non-Profit Day.

Open to all existing non-profits in Montreal, this  open house concept event allows Montrealers – especially students, to learn more about their causes, needs, and future.

This event is a great opportunity for those looking to learn more about the non-profit organizations in their community and also learn how to get involved.

Bring your business cards because it will be an amazing opportunity for networking!