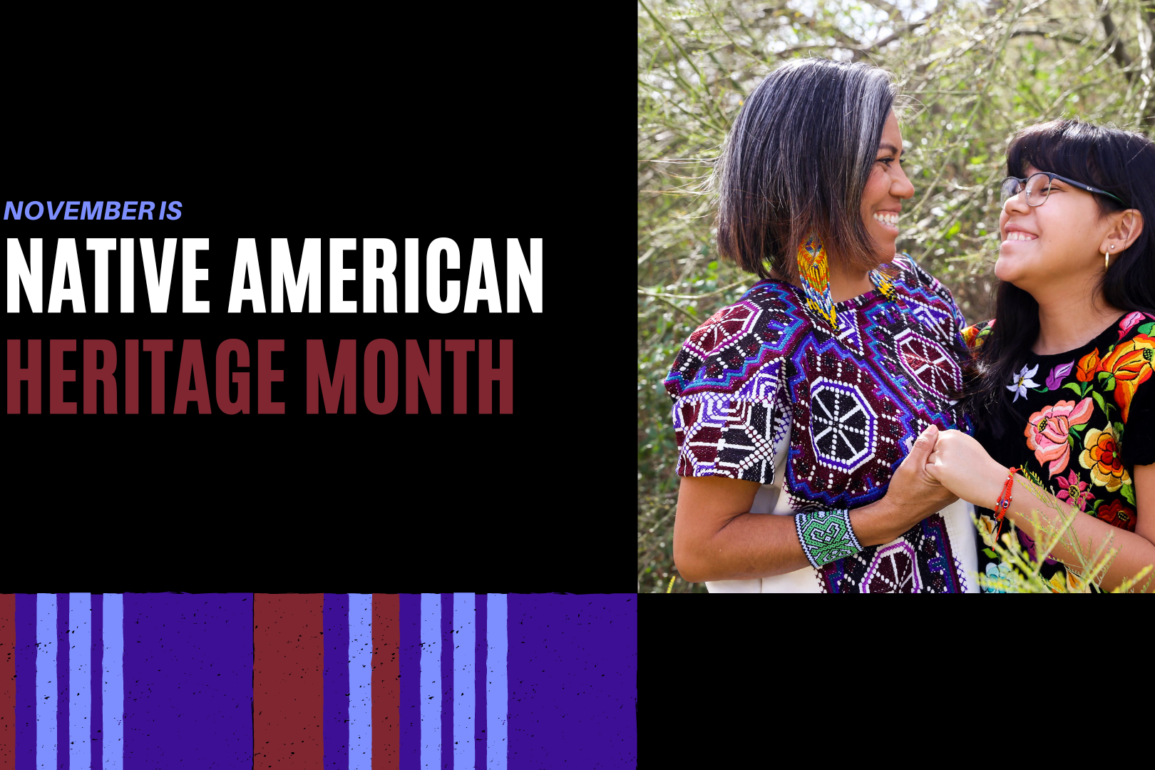 November is Native American Heritage Month—an opportunity to celebrate and learn about the rich and diverse cultures, languages, and histories of Indigenous peoples across the United States. It is a time to honor Indigenous culture makers, visionaries, activists, and leaders—past and present—while amplifying the contemporary voices of Native Americans and their communities.

Originally conceived of in 1915 as a single day recognition of Native peoples’ contributions to the development of the United states, Dr. Arthur C. Parker—a Seneca Indian and the director of the Museum of Arts and Science in Rochester, NY—convinced the Boy Scouts of America to host a First Americans Day. This evolved over the course of the 20th century, taking place on different dates in different states and under a variety of names, until 1990 when President George H. W. Bush approved a joint resolution designating November as National Native American Heritage Month.

Native American Heritage Month is also a time to acknowledge the losses suffered through disease, warfare, and forced assimilation stemming from the colonization of North America by Europeans. In that same spirit, we acknowledge and honor the Haudenosaunee peoples, specifically the Kanien’keha:ka, or Mohawk tribe, on who’s ancestral land we in the North Country live, and the local communities of Ganienkeh, Akwesasne, Kahnawake, and Kanesatake in both the US and neighboring areas of Canada.

Use the classroom-ready resources, books, and activities below to learn about Native American histories and cultures, past and present, this Native American Heritage Month and beyond.

Talking About Race: The Clutes | Mohawk Family From Akwesasne

Grades PreK-3
Meet the Clutes, a traditional Mohawk family from the Akwesasne territory in northern New York State. In this video, the Clute family talks about respect, stereotypes, fairness, justice, and resilience in direct, age-appropriate, and honest ways as they celebrate their culture and community. This video is part of a growing set of resources from the Sesame Workshop Coming Together initiative which provides tools, sparks conversations and supports kids as they grow into allies and advocates.

Grades K-2
Informational text and Alaska Native culture form the basis of the groundbreaking Molly of Denali series and its educational resources. The Molly of Denali collection on PBS LearningMedia offers videos, digital games, lessons, teaching tips, and activities so that educators can utilize the series in the classroom.

Grades K-12
New York State and Local History and Government is a collection of resources designed to complement the New York State Social Studies Framework for 4th Grade covering disciplinary core topics from the geography of New York State to immigration and migration. Explore featured resources in the Native American Groups and the Environment section with topics like the diverse ecosystem that Henry Hudson encountered when he arrived at Mannahatta; and video of the Oknegakdagye (Along the Water) Dancers from the Akwesasne Mohawk Territory performing a traditional Mohawk hunters’ dance.

Grades 3-12
Native Knowledge 360° (NK360°) from the National Museum of the American Indian provides educators and students with new perspectives on Native American history and cultures. Most Americans have only been exposed to part of the story, as told from a single perspective through the lenses of popular media and textbooks. NK360° provides educational materials, virtual student programs, and teacher training that incorporate Native narratives, more comprehensive histories, and accurate information to enlighten and inform teaching and learning about Native America. NK360° challenges common assumptions about Native peoples and offers a view that includes not only the past but also the vibrancy of Native peoples and cultures today.

Grades 6-8
Tending Nature explores how, for a thousand years, land has provided for Native peoples and how tribal groups have actively cared for the land. This science curriculum, designed for middle school grades, explores the ecosystems of the Klamath River Basin, the problems caused by an unhealthy river system, and the collaborative efforts by tribes, government agencies, and non-profit groups to solve the problem by restoring the river.

Native America in the Classroom

Grades 6-12
Explore the world created by America’s First Peoples with PBS’ Native America. The four-part series reaches back 15,000 years, revealing massive cities aligned to the stars, unique systems of science and spirituality, and 100 million people connected by social networks spanning two continents. In the Native America in the Classroom collection, you will find the program in full, along with stand-alone clips, classroom activities, and support materials bringing the value of sacred origin stories and the complexity of early Native city planning to life, culminating in hands-on activities designed to help students better understand both.

Grades K-2
Elizabeth Peratrovich (Raven of the Lingít Lukaadx̱.ádi Clan) is an important figure in Alaska’s history who helped pass the country’s first Anti-Discrimination Bill in 1945. Learn more about Peratrovich’s story in the Molly of Denali episode “Molly and Elizabeth.”

Grades 6-12
Examine the enigmatic life and mind of National Medal of Arts-winner Navarro Scott Momaday, the Kiowa novelist, short-story writer, essayist and poet. His Pulitzer Prize-winning novel “House Made of Dawn” led to the breakthrough of Native American literature into the mainstream. Although his heritage is a central theme, Momaday’s work asks universal questions: what are our origins and how do we connect to them through our collective memories? This PBS LearningMedia collection from the American Masters film, Words from a Bear: N. Scott Momaday, illuminates how he grappled with these questions, his identity and the challenges of being a Native American artist in today’s world.

Grades 6-12
Learn about Wilma Mankiller, the first female Principal Chief of the Cherokee Nation, elected at a time when women faced considerable opposition to taking on leadership roles. During her time in office, she helped solidify the Cherokee Nation’s political structure, expanded economic opportunities, improved health care services, and reminded people of traditional roles for women that were more empowering than those that developed over many generations of involvement with colonialist and western societies.

Grades 6-12
Queen Lili‘uokalani was the first sovereign queen, and the last monarch, of the Kingdom of Hawaiʻi. At the time of her reign, a new Hawaiian constitution imposed by white Americans had reduced the voting rights of Hawaiian citizens and much of the monarchy’s powers, transferring power to American business owners and missionaries. Learn how Lili‘uokalani fought to restore native Hawaiian rights in this video from Unladylike2020.

Design a Poster to Honor the Indigenous Lands You Live On

Grades K-5
Land Acknowledgements have become more widespread in recent years in schools, conferences, and buildings. They are a great way to honor tribes and how they have taken care of the land through the present day. Have you ever wondered about the Indigenous lands you live on? Spend some time as a family discovering the history and culture of the tribes who cultivated the lands you live on and design a poster to honor them.

Grades 3-8
In this video, Onondaga storyteller Perry Ground speaks to students at Gowana Middle School in Clifton Park, New York about the introduction of language into meaning and purpose of others’ identities, particularly, the name Iroquois. The people who lived on this land before colonization call themselves the Haudenosaunee. What is in the name, and how can we learn a bit more about a community through the names given to the schools and streets?

Grades 6-12
In this interactive lesson from Unladylike2020, students will learn about Zitkála-Šá and Susan La Flesche Picotte, who worked tirelessly to improve the lives of Native Americans but had different perspectives and opinions about assimilation policies of the time. By learning more about their lives and analyzing primary source documents written by both women, students will gain a deeper understanding of how assimilation policies impacted indigenous people in the past and continue to have consequences in the present.

The Akwesasne Library and Cultural Center is a public library and museum that serves the people of Akwesasne, the surrounding communities and the visiting public by providing access to educational and cultural resources. Located in the heart of Akwesasne, the center provides a positive space for educational purposes and is one of the cultural hubs of the community.

The Six Nations Iroquois Cultural Center, located in the Northeastern Adirondack Mountains, provides for the viewing of 3000-plus artifacts with an emphasis on the culture of the Six Nations of the Iroquois Confederacy (Haudenosaunee): Mohawk, Oneida, Onondaga, Cayuga, Seneca and Tuscarora. The museum features story telling lectures and creates educational experiences so that visitors, teachers and students may acquire the knowledge needed to better understand the history, culture, contemporary realities, and the potential futures of Native Nations.

The Seneca Art & Culture Center is a year-round interpretive facility at Ganondagan, the original site of a 17th century Seneca town that existed there peacefully more than 350 years ago. The center tells the story of the Seneca and Haudenosaunee (Iroquois) contributions to art, culture and society for more than 2,000 years to the present day. Designed to fit into the natural landscape, the center features an interactive, multi-media Exhibit Gallery, including a changing exhibit space, Orientation Theater, auditorium, and gift shop.

The Iroquois Museum is an educational institution dedicated to fostering understanding of Iroquois culture using Iroquois art as a window to that culture. The Museum is a venue for promoting Iroquois art and artists, and a meeting place for all peoples to celebrate Iroquois culture and diversity. As an anthropological institution, it is informed by research on archaeology, history, and the common creative spirit of modern artists and craftspeople.

The New York State Museum, which explores and expresses New York State’s significant natural and cultural diversity, both past and present, features the ongoing exhibition Native Peoples of New York. Museum-goers can explore the cultural heritage of the first New Yorkers — from the Ice Age to the present — through dioramas, displays of artifacts and art, and a life-size reconstructed longhouse.