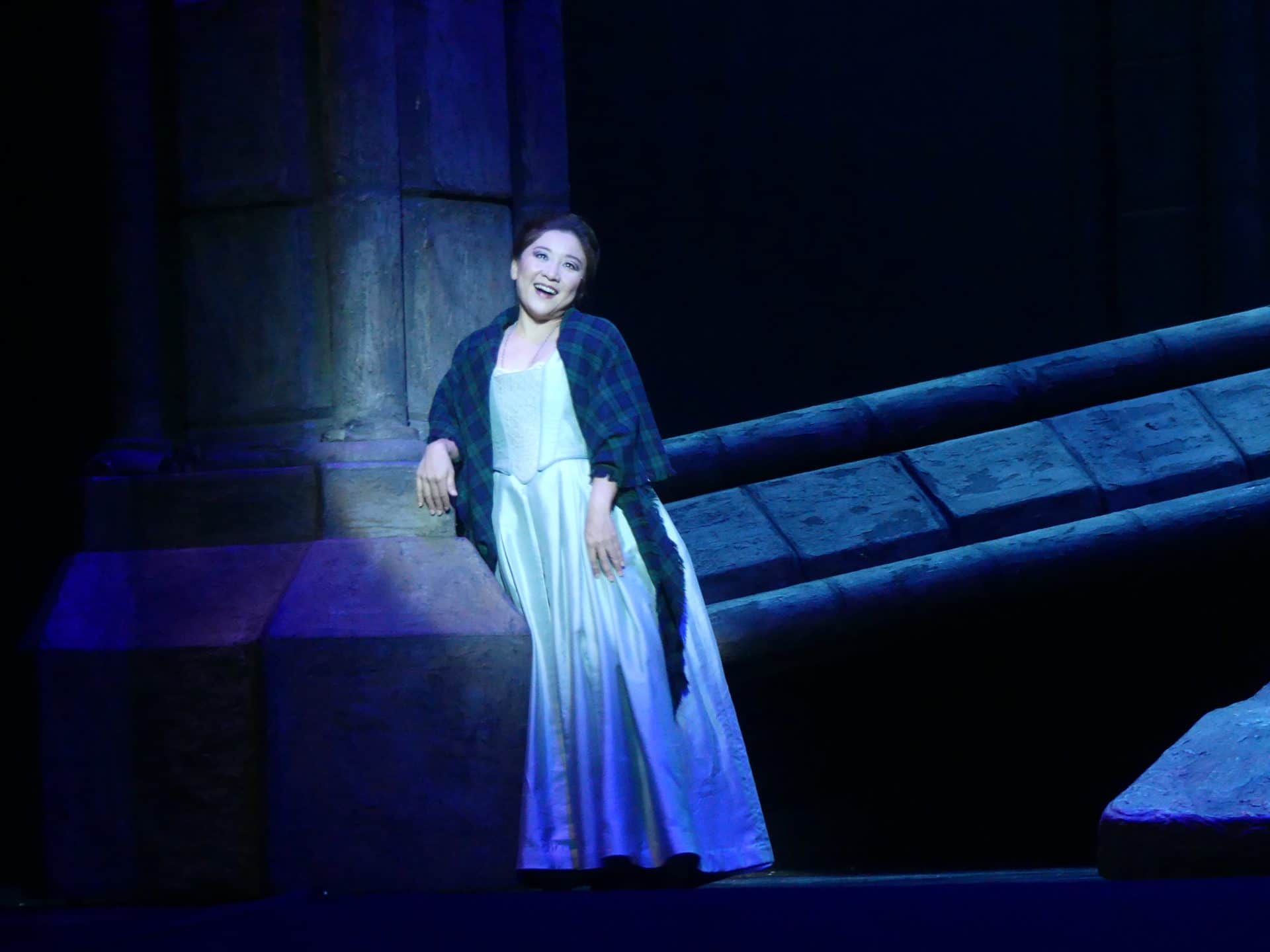 Celebrate the beauty of the human voice !

The title role of Lucia , performed by Korean-American coloratura soprano Kathleen Kim , is considered to be one of the most difficult in the entire repertoire for bel canto sopranos.

Having had the chance to attend the dress rehearsal , I was enthralled by Kim’s emotion imbued performance of Lucia’s iconic “mad scene” , where after being betrayed by her brother’s schemes, forced to marry against her will and scorned by her lover Edgardo, Lucia sinks deeper and deeper into delusion and madness.

The part requires technical and acting prowess which Kim delivers beautifully with subdued finesse. Amid a beautiful décor that sets the plot on the grounds and halls of Lammermoor estate and the Ravenswoods graveyard in Scotland, she fully embodies the role of Lucia by sauntering around the stage with a lolling head and wild smile – while carelessly waving a sharp dagger around her entourage….mesmerizing !

With a talented cast all dressed in Scottish period costumes , a detailed set and haunting music performed by the orchestra led by maestro Fabrizio Ventura, join soprano Kathleen Kim and Quebec tenor Frédéric Antoun in this absolutely unforgettable evening of bel canto!

You can catch l’ Opéra de Montréal’s production of Lucia di Lammermoor in Salle Wilfrid-Pelletier at Place des Arts this November 9. 12. 14 and 17.

For more info and tickets:

Next Wednesday, November 23rd at Salle Claude-Champagne , Theatre Lyrichoregra 20 is proud to present its XXVI Benefit Gala for the Young Lyric Ambassadors.

This prestigious event, will bring together 30 talented singers from ten different countries together on stage accompanied by the Montreal SINFONIA orchestra to an audience of over 500 opera lovers including Alejandro Estivill Castro, Consul General of Mexico, top executives from the philanthropic, corporate and cultural sectors along with several international opera directors who will be scouting and recruiting the next generation of operatic talent in this unforgettable concert – cocktail (VIP) evening.

The singers will be performing a series of private pre-concerts leading up to the gala, with the chance to win bursaries and the opportunity to be placed in prestigious international residency programs.

For the Love of Tradition:

Grandiose entertainment at the Viennese Ball of Montreal!

For those who love dance, music and fine dining, a ball is the epitome of elegance and glamour !

The flame of old romanticism is kept burning bright right here in the heart of the city by the Montreal Austrian Society that annually celebrates the Viennese Ball tradition by hosting its “Viennese Ball of Montreal”:  a glorious evening at which elegant ladies in floor-length gowns and fine gentlemen in black tie (tuxedo) or tails (white tie) or gala uniform, assemble to waltz, dine, see, and be seen in one of Montreal’s finest venues: the sumptuous Marriot Chateau Champlain.

The annual Viennese Ball of Montreal is a high profile charity event that celebrates the old European tradition of gallantry and gathers different generations and cultures together to celebrate Austrian music, culinary delights and tradition.

For their 2019 edition, held next November 16th , the Viennese ball will be themed to celebrate the 150th anniversary of the Vienna State Opera! The Opera opened on Vienna’s Ringstrasse on May 25th, 1869 with a performance of Mozart’s Don Giovanni. The Emperor Franz Josef and Empress Elisabeth ” Sissi” were in attendance on that glittering night long ago.

From 7:00 PM. Guests can expect an evening of refined elegance as they are first serenaded by live musicians on the grand staircase, admire the gorgeous attire of others, sip champagne, have their picture taken and get a glimpse of the numerous enticing items on display for the silent auction with funds going towards the charities that the Ball supports:  S.O.S Children’s Villages, McGill’s Schulich School of Music, Leave Out Violence, and the German Schools of Montreal.

Around 8:00 pm, guests will be called into the main ballroom for the opening ceremonies, speeches by dignitaries, live entertainment and an elaborate 5 course gourmet dinner prepared by chefs of the Marriott Chateau Champlain.

The crowning highlight of the evening will be the regal introduction of the 16 elegant, young debutantes and their dashing escorts. With grace and beauty, the young couples will perform a choreographed quadrille under the direction of supervisors of the Arthur Murray Dance School.

Once the speeches and ceremonies are completed, the announcement of “Alles Walzer!” or “Everyone waltz!” opens the dance floor to everyone. The Marriott Chateau Champlain has one of Montreal’s best dance floors which quickly fills with all the exuberant attendees! In previous editions , three musical ensembles from SophistOccasion: the Showband, alternating with the String Quartet and the SophistOccasion Pop Trio, kept guests dancing throughout the evening right into the early hours.

Other evening activities include trying your luck and skill at the roulette or poker tables of the Charity Casino or enjoying a traditional Goulash soup / Würstl and drink “G’spritzten” at the adjoining Heurigen  (Viennese wine tavern).

This year in celebration of the Vienna State Opera , the Vienna Ball will have access to the spectacular Caf ‘ Conc hall where guests will be able to sing along to traditional Wienerlieder music until closing.

The Viennese Ball of Montreal is accessible to the public and attendance is as simple as purchasing a ticket. ( 275$ )

There are preferential rates for guests under the age of 35 for the entire evening ( 175$ ).

Young attendees might also wish to purchase after 11 pm admission tickets offered at the reduced cost of $75.00 which includes a drink of your choice in the Heurigen, casino tokens, a gift bag and the chance to dance the night away.

For out of town visitors, the adjoining Hotel Marriott Chateau Champlain is offering reduced room rates for Ball guests.

For more information on the 2019 Viennese Ball please consult their main webpages:

1. Your first ( of hopefully many concerts in this series ! ) was focused on the music of Hungary . What were the challenges you faced to select representative pieces for you and your performers to present ?  Were all the pieces widely recognized Hungarian repertoire ? Was it based on personal preferences ?

I think that the biggest challenge was to select works that would represent the vision I had for the concert without losing the attention and engagement of the audience. Although the Kodaly pieces in the first half were based on popular folk melodies, the settings were not necessarily recognized.

Ideally I would have liked to have programmed a concert just on these Kodaly settings, but I believe it would be tough for audience to sit through it all . Although these pieces have various moods and colors, I think some sort of story or narrative would be needed to create a more engaging and immersive experience. That being said, I thought programming a few more well-known pieces in the second half would balance out the program. The song sets by Franz Liszt are some of his most popular vocal pieces ( in French might I add !), followed by the virtuosic violin works and some more well-known opera excerpts.

The end of the concert had to be a big show stopper so naturally, I chose one of the most famous arias in Hungarian operatic repertoire. All in all , I think I found a nice balance between works that were unfamiliar to the audience while including famous beloved showstoppers.

This is a tough question because I could talk for hours about it. Kodaly once described Hungarian music as being more active than other music. What he meant by this is that there are distinct rhythmic idiosyncrasies and a constant change of mode. There are three different kinds of Hungarian folk song, which are defined by the period they were “composed” or discovered to originate from, but most Hungarian folk songs are made up of a Hungarian pentatonic scale. There are modifications to this scale throughout the different verses of the folk song. Essentially this creates a structure where each verse of the folk song is made up of two modes. This makes each verse feel like it is constantly in a state of fluidity and motion and it doesn’t let the ears settle on what key you are in. The rhythmic idiosyncrasies mainly occur because of the Hungarian language. This distinct sixteenth and dotted eighth staccato rhythm can be found in every folk song BUT the place in the melody where these are found shift from verse to verse !

3. What do you hope the Hungarian Community took away from this concert ?

The most important thing that I hope they took away from the concert is that Hungarian music is still alive and very relevant to audiences of all backgrounds. We had an overwhelming attendance of many different cultures from Montreal and the program was enjoyed by everyone. I had many people come up to me and say about the Kodaly pieces that they never knew Hungarian art songs were so beautiful.

For many the opera hits and violin works were more akin to what general audiences are used to hearing. I’m happy that I could offer a good sample of the depth of variety that exists in Hungarian musical culture.

4. What is your vision for the future for this concert series ?  What audience do you wish  to attract ?

The Music of Hungary concert was only the starting point to explore the music and traditions of the various cultures that make up Canada.

My goal is to have more concerts that will have a similar format as the Music of Hungary concert. Whether it be Italian, French, German, Russian, etc. I want to be able to accurately represent the music and cultures that define these nations.

Often we disassociate music with the culture we are listening to. In other words, we can recognize a scale or a motive that is stereotypical of music from that country, but until you are surrounded by the culture at the same time, it is hard to “get it”.

When it comes to an audience I want to attract? Anyone and everyone. I think there is something for anybody who will come to one of our concerts.

5. Any closing remarks about the importance of music to bring people and communities together ?

Every culture has had a different evolution and journey in the world and unique music that represents that. Whether it’s through the words, melodies, or rhythms, there is something new to experience and take away into our daily lives.

Whether we admit it or not, the music we hear affects our lives on a daily basis. I am hoping that by sharing and engaging our communities with concerts that feature music from all walks of life, we can come together and thrive as a society.