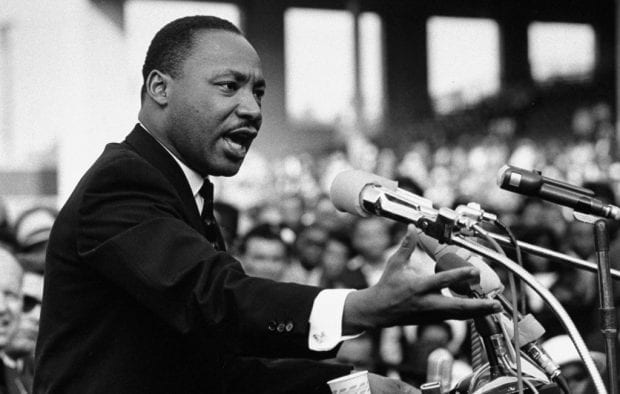 On January 18th we honor the memory and work of Dr. Martin Luther King, Jr.

Reverend Dr. Martin Luther King, Jr. was a civil rights activist, spiritual leader, and proponent of non-violent direct action during the Civil Rights Movement in America. He worked to improve the lives of African-Americans, fighting oppression with civil disobedience and advocating for equality through systemic change.

Dr. King protested racial discrimination in federal and state laws across the country, famously organizing boycotts, sit-ins, and marches including the historic 1963 March on Washington, where on the steps of the Lincoln Memorial he delivered his famous “I Have a Dream” speech. In 1964, he won the Nobel Peace Prize for his work.

On April 4, 1968, Dr. King was assassinated in Memphis, Tennessee sparking riots and mourning across the nation. On the third Monday in January each year we honor the birth, memory, and history-altering work of Dr. Martin Luther King, Jr. with a federal holiday to mark the occasion.

Continue below to learn more about the life and legacy of Dr. King, the history of the Civil Rights Movement, and resources for supporting racial justice and civil rights engagement in your household or classroom. And be sure to watch the Learning at Home block on January 18th for programs celebrating and commemorating the holiday.

Grades PreK-4
From “Freedom Summer” to “Through My Eyes,” celebrate Martin Luther King, Jr. Day with these children’s books that explore the life and legacy of the civil rights icon.

Grades 2-6
Martin Luther King Day honors the life and legacy of one of the visionary leaders of the Civil Rights Movement and recipient of the 1964 Nobel Prize for Peace. It is celebrated on the third Monday in January.

Grades 3-7
In the second half of the 20th century, racial tensions rose in the US as African Americans began to challenge unjust laws that supported discrimination and segregation. This movement found its leader in the patient and inspiring minister, Dr. Martin Luther King, Jr. Watch this short video and engage in two primary source activities to explore how King’s deep-seated commitment to nonviolence contributed to the expansion of social justice in the United States, particularly for African Americans.

Grades 5-10
Historians reflect on the life and legacy of Dr. Martin Luther King Jr. and his role in the Civil Rights Movement.

Analyzing King’s “I Have a Dream” Speech Video

Grades 6-12
In this video, schoolchildren take turns reading from Martin Luther King, Jr.’s famous “I Have a Dream Speech” on the steps of the Lincoln Memorial.

Out of the Shadows | Black America Since MLK: And Still I Rise

Grades 9-12
On March 7, 1965, peaceful marchers calling for voting rights were attacked by the police in Selma, Alabama. The shocking images were broadcast on television, and galvanized the country. Outraged, President Lyndon Johnson astonished the nation by invoking the mantra of the Civil Rights Movement.

Learn About the Civil Rights Movement

Achievements of the Civil Rights Movement

Grades 5-10
In this video from GPB, learn how following the 1963 March on Washington, Congress passed the Civil Rights Act of 1964 and the Voting Rights Act of 1965 that ensured that the rights of all people were protected, regardless of one’s race, gender, color, or national origin.

Activism in the Civil Rights Movement

Grades 6-8
In this interactive lesson, students will learn about the historical background of racial segregation. They will also learn about a number of brave individuals and groups who stood up against segregation during the 1950s and 1960s. Students will use media, text, and images to analyze the following question: What do the stories of individuals like Ruby Bridges and Rosa Parks, the Freedom Riders, and activists suggest about the role of citizens in shaping democracy?

The 50th Anniversary of the March on Washington: Leadership at the March through Music and Speeches

Grades 7-12
While Martin Luther King’s “I Have a Dream” speech became the most famous to come out of the March on Washington, he was by no means the only person to address the massive crowd assembled on the National Mall. Use this lesson plan to look at the other civil rights leaders and orators who spoke that day, and how effectively they conveyed their messages.

Grade 12
Explore how our civil rights as Americans enforce protection against discrimination and exclusion, learn about the differences between the 1866 Civil Rights Act and 1964 Civil Rights Act, then review the history of affirmative action and answer questions about your opinion of the law, in this Democracy in America interactive activity from Annenberg Learner.

Civil Rights: Then and Now Collection

Grades 3-12
While students today may think of the Civil Rights Movement as part of the distant past, it’s clear that many of the problems that fueled that fight are still with us. This collection of videos, documents, and primary sources lends context to the events and leaders that defined the Civil Rights Movement’s first three decades (1954-1985). These resources also capture the issues and activists involved in the struggle today—those making headlines, stirring debate, and trending on social media.

Grades PreK-2
In the PBS KIDS Talk About: Race & Racism special, PBS KIDS spoke with real families and had conversations about racial identity, anti-Black racism, and how it is incumbent on all of us — children and parents alike — to actively work towards building a more equitable society.

How to Teach Children About Cultural Awareness and Diversity

Grades PreK-3
Use these tips to spark you children’s curiosity about who they (and others) are in their world. By helping your child understand and respect similarities and differences you will also help your child to understand who he is in the context of your race, ethnic group, culture, religion, language and familial history.

Grades PreK-4
Watch as Arthur talks about ways we can stand up for what’s right, then, use the “Civics for Young Learners” and “Making Your Classroom a Safe Space” resources to help children understand their role in making the world a better place for everyone!

Grades PreK-5
Children’s books continue to be an invaluable source of information and values. They reflect the attitudes in our society about diversity, power relationships among different groups of people, and various social identities. Carefully choosing quality children’s books is an indispensable educational and child-rearing task. Use this Guide from Social Justice Books to help you identify and select anti-bias children’s books for your family or classroom.

Common Sense Media: How White Parents Can Use Media to Raise Anti-Racist Kids

Grades 1-12
Media makes a big impression on kids. The messages you send — from the media you choose, to the conversations you initiate — are what kids will hold in their hearts and minds. Here are 10 ideas for how to use media to start and continue conversations about race and racism with your kids.

Grades 6-12
Many artists create work that intersects with political activism and social justice causes. Throughout history, art has been used as an accessible tool for communication, raising awareness about social issues and affecting positive change. This video collection will introduce students to artists who create work that inspires dialogue about problems faced by communities around the world, and will provide inspiration for classroom projects with a social, public or political purpose.

Grades 9-12
In this interactive lesson, students explore the extent to which society (and they themselves) may discriminate based on factors they’re not even aware of, implicit biases. In this lesson you’ll learn what implicit bias is, how it influences your own thinking, and how its impact can be minimized.

Check out the Mountain Lake Learning at Home block on Martin Luther King Jr. Day for programs celebrating and commemorating the holiday.

Few individuals have had such a profound impact on modern society as did Reverend Dr. Martin Luther King, Jr. In this one-hour tribute to the life and legacy of Dr. King, New York State invites you to learn more about the people and organizations in our great state who embody the principles of America’s greatest leader for social justice, freedom, and equality for all. This program focuses on New Yorkers who are making a difference by making  positive influences on their communities.