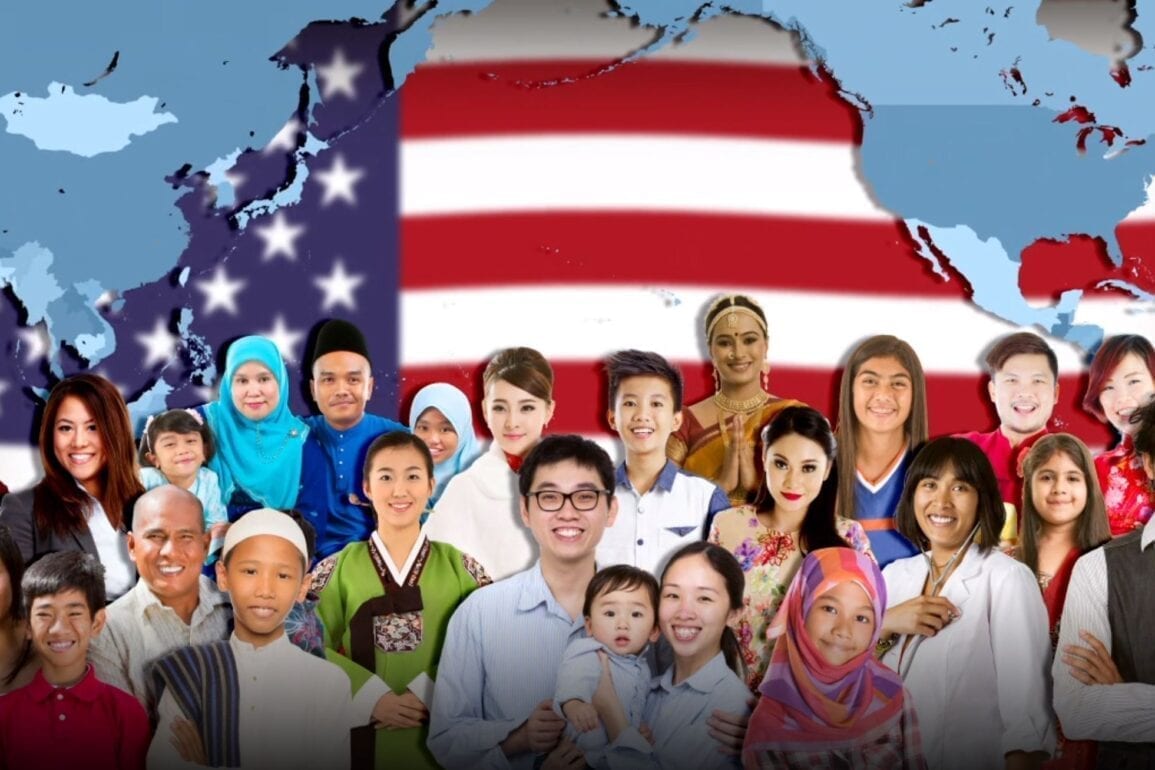 Mountain Lake PBS is proud to celebrate AAPI Heritage this May and all year round!

May is Asian American and Pacific Islander Heritage Month, a time to honor the important role generations of Asian Americans and Pacific Islanders have had, and continue to play, in the story of our country. Originating as a week long celebration in 1979 under President Jimmy Carter, AAPI Heritage Month was later established in 1992 to mark the arrival of the first Japanese immigrant to the United States on May 7, 1843, as well as the anniversary of the completion of the transcontinental railroad on May 10, 1869.

Asian Americans and Pacific Islanders come from almost 50 different countries and speak over 100 different languages and dialects. Continue below to celebrate and learn about the diversity of Asian American and Pacific Islander cultures, histories, and accomplishments, and engage in timely and important conversations about race and allyship in America, with resources for all ages and a full lineup of programs in our weekday Learning at Home block.

Grades PreK-3
To celebrate Asian American and Pacific Islander Heritage Month, PBS KIDS put together a list of favorite books featuring Asian characters, written by Asian authors, or illustrated by Asian artists — all chosen by kids and parents like you! Check out these heartwarming and fun tales with your family.

Asian-Pacific American Heritage Month | All About the Holidays

Grades K-4
In the United States, May is Asian-Pacific American Heritage Month. Many people use the month to honor the accomplishments of Asian Americans and Pacific Islanders in the United States while celebrating their diverse heritages.

Grades K-12
A collaborative project of the Library of Congress and the National Archives and Records Administration, National Endowment for the Humanities, National Gallery of Art, National Park Service, Smithsonian Institution and United States Holocaust Memorial Museum, the contents of this site highlight primary documents, blog posts, videos, recordings and more related to AAPI history and culture and resources to uplift Asian and Asian American voices.

Grades 4-12
As America becomes more diverse, and more divided, Asian Americans are experiencing a wave of discrimination. In the face of unimaginable challenges, how do we move forward together? Told through intimate and personal life stories, the resources in this collection cast a new lens on U.S. history and the ongoing role that Asian Americans have played in shaping the nation’s story.

Why Do We Say “Asian American” Not “Oriental”? | Origin of Everything

Grades 9-12
The word Oriental is hundred of years old, so why do Americans no longer use the word “Oriental”? And how did the term “Asian American” take its place? Watch this video from Origin of Everything to find out.

Grades 6-12
Until his death at the age of 106, Tyrus Wong was America’s oldest living Chinese American artist and one of the last remaining artists from the golden age of Disney animation. The quiet beauty of his Eastern-influenced paintings had a pioneering impact on American art and popular culture.

Grades 6-12
Known for her groundbreaking debut novel The Joy Luck Club, and bestselling novels, librettos, short stories and memoirs, Amy Tan is one of the most prominent and respected literary voices working today. A global icon for Asian Americans, Tan’s work has been translated into 35 languages and gives a brave look into the humanity of her fictional and autobiographical writing alike. Learn more about Amy Tan with the American Masters Collection for the film Amy Tan: Unintended Memoir.

Grades 7-12
Queen Lili‘uokalani was the first sovereign queen, and the last monarch, of the Kingdom of Hawaiʻi. At the time of her reign, a new Hawaiian constitution imposed by white Americans had reduced the voting rights of Hawaiian citizens and much of the monarchy’s powers, transferring power to American business owners and missionaries. Learn how Lili‘uokalani fought to restore native Hawaiian rights in this video from Unladylike2020.

Grades 7-12
Learn about actress Anna May Wong—the first Chinese American Hollywood movie star, producer and one of the most influential style icons of her time, in this resource from Unladylike2020. Throughout Wong’s career, she encountered racism and stereotyping in the roles she was offered, but in the end she found a way to flourish as an actor on her own terms starring in 60 films.

Grades 7-12
Tye Leung Schulze became the first Chinese American woman to work for the federal government and the first Chinese American woman to vote in a U.S. election, in 1912. Learn how this inspiring woman resisted domestic servitude and an arranged child marriage to provide translation services and solace to Asian immigrant victims of human trafficking in San Francisco in this video short from Unladylike2020.

Grades 9-12
Cartoonist and MacArthur Foundation Genius, Gene Luen Yang is the artist behind popular work like the Avatar: The Last Airbender comics and American Born Chinese, the award winning graphic novel that details what it’s like to grow up Asian in America. Learn more about American Born Chinese, and how Yang breaks down racist stereotypes through compelling characters and the coming-of-age plot with Pop Culture Classroom’s Graphic Novel Teaching Guide. And check out this interview with the artist from PBS NewsHour for more on his intimate and autobiographical style of work and why he believes in the educational power of comics.

Grades PreK-3
This growing set of resources from Sesame Workshop’s Coming Together initiative provides tools, sparks conversations and supports kids as they grow into allies and advocates. Recent additions include content to specifically address anti-Asian racism as well as new resources aimed at children ages six to eight.

Grades 5-12
During the pandemic, there has been a steep rise in racial discrimination, harassment, and physical assaults against Asian American youth. Parents play a key role in supporting children who may face these attacks or see this behavior around them. The William James College Center for Multicultural and Global Mental Health Asian Mental Health Program, in collaboration with the Massachusetts General Hospital Center for Cross Cultural Student Emotional Wellness, has developed a guide to provide parents with the knowledge and skills to effectively support their children. The guide is available in English, Korean, Chinese, Vietnamese, and Japanese.

Grades 6-12
A recent string of attacks on elderly Asian Americans has brought attention to the rise of violence and harassment of Asian Americans. Just since the pandemic began, more than 3,000 anti-Asian “hate incidents” have been reported in the U.S., according to the group Stop AAPI Hate. First, watch this PBS NewsHour video, then dig deeper with the background reading and discussion questions provided.

Grades 9-12
In this interactive lesson, students explore the extent to which society (and they themselves) may discriminate based on factors they’re not even aware of, implicit biases. In this lesson you’ll learn what implicit bias is, how it influences your own thinking, and how its impact can be minimized.

During AAPI Heritage Month, check out the Mountain Lake PBS Learning at Home block, all May long! Join us as we celebrate, honor, and learn about AAPI history, culture, and the important contributions made by Asian Americans and Pacific Islanders.

2 PM: And Then They Came for Us

Seventy-eight years ago, Executive Order 9066 paved the way to the profound violation of constitutional rights that resulted in the forced incarceration of 120,000 Japanese Americans. Featuring George Takei and many others who were incarcerated, as well as newly rediscovered photographs of Dorothea Lange, And Then They Came for Us brings history into the present, retelling this difficult story and following Japanese American activists as they speak out against the Muslim registry and travel ban.

An intimate portrait of the groundbreaking writer that interweaves archival imagery, including home movies and personal photographs, animation and original interviews to tell the inspiring story of Tan’s life and career.

Stories in Thread focuses on Hmong Pa Dau or Story Cloths. The traditionally hand-made textiles are integral to what it means to be Hmong in America. Despite this significance of Pa Dau to identity and cultural survival, the art form is disappearing. The perspective of the elder generation, the fighters and refugees from Laos, is expressed in their own Hmong language and their fear of cultural loss is immediate and painful. The story of Hmong Pa Dau is the story of identity change and perseverance, it is an exploration of the refugee and immigrant experience, and also a commentary on contemporary minority issues in America.

2:30 PM: Nobody Dies: A Film About a Musician, Her Mom, and Vietnam

San Fransisco-based indie singer-songwriter Thao Nguyen journeys to Vietnam for the first time and brings her mother ⎯ who hasn’t been back since the fall of Saigon. The trip causes Thao to reflect on her upbringing in the United States, her extended family in Vietnam, all the while unraveling like a love letter to her mom.

The Ito Sisters captures the stories of three Japanese American sisters, interviewed in their 80’s and 90’s, as they recount how their immigrant parents struggled to make a life in America at the beginning of the 20th century. The family’s chronicle is set against the backdrop of the anti-Japanese movement in California, a 60-year campaign by politicians, journalists, landowners, labor leaders and others that culminated in the evacuation and incarceration of more than 120,000 Japanese Americans from the West Coast during World War II. The Ito Sisters is written, directed and produced by Antonia Grace Glenn, the granddaughter of the middle of the three sisters.

Mr. Tornado is the remarkable story of the man whose groundbreaking work in research and applied science saved thousands of lives and helped Americans prepare for and respond to dangerous weather phenomena. Ted Fujita was a Japanese-American engineer turned meteorologist. He immersed himself in research on tornadoes and introduced the “Fujita Scale”, a six-point scale to classify degrees of tornado intensity.

Asian Americans is a five-hour film series that chronicles the contributions, and challenges of Asian Americans, the fastest-growing ethnic group in America. Personal histories and new academic research will cast a fresh lens on U.S. history and the role Asian Americans have played in it. Episode one, Breaking Ground, describes an era of exclusion and U.S. empire, as new immigrants arrive from China, India, Japan, the Philippines and beyond. Barred by anti-Asian laws they become America’s first “undocumented immigrants,” yet they build railroads, dazzle on the silver screen, and take their fight for equality to the U.S. Supreme Court.

An American-born generation straddles their country of birth and their parents’ homelands in Asia. Those loyalties are tested during World War II, when families are imprisoned in detention camps, and brothers find themselves on opposite sides of the battle lines.

During the Cold War years, Asian Americans are simultaneously heralded as a Model Minority, and targeted as the perpetual foreigner. It is also a time of bold ambition, as Asian Americans aspire for the first time to national political office and a coming culture-quake simmers beneath the surface.

During a time of war and social tumult, a young generation fights for equality in the fields, on campuses and in the culture, and claim a new identity: Asian Americans. The war’s aftermath brings new immigrants and refugees who expand the population and the definition of Asian America.