Many of us know Alice Ferris well – the face behind Downton Abbey pledge drives.  But Alice’s involvement with PBS started nearly at birth – and has been a driving force behind most of her career and great success in the world of fundraising and public broadcasting.

Alice is a first-generation American, born of Taiwanese immigrants, Chien-Chuan and Mei-Yun Lin.  “One of the things my mom told me,” Alice explains, “is that based on her own personal experience, she knew that she needed to move to the United States.  She knew that if she stayed in Taiwan and had a daughter, she might not have as many opportunities”.

The Lins emigrated to Beaver Dam, Wisconsin, population 13,000. They were the first Asian family in the county, and Alice was the first Chinese baby born at Beaver Dam Lutheran Hospital.  Alice jokes: “For the first 18 months of my life, pretty much everything we did made the local paper!  The community was very proud of us – ‘Look at what our Chinese family is doing!’”

PBS was a big part of the Lin daughters’ education.  “I was fixated on Mr. Rogers!” Alice reminisces.  “My mom would take us any time there was a Mr. Rogers live show…The number of pictures from my childhood with me and my sister wearing matching Sesame Street themed clothing is pretty embarrassing!”

As part of their quest to get to know America, the Lins travelled as much as they could afford to. “When I was two years old, we were at La Guardia airport, my mom was holding me.  Suddenly she started to run down the terminal, my dad had no clue 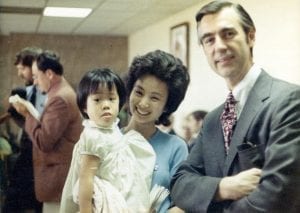 what’s going on so he just chased after her.  When he caught up with her at another gate, she was standing talking to this man.  And my dad still didn’t know what was going on until he got closer and realized that it’s Mr. Rogers!  My mom chased after him to get a picture. Fortunately, my dad the typical tourist had his camera around his neck at all times!”

That picture has been on Alice’s wall since she had her first job – at Wisconsin Public Television.  She quickly rose through the ranks of membership, production and fundraising, mentored by talented individuals with whom she still regularly consults.

Alice considers herself an ‘inaugural PBS kid’.  From Mr. Rogers and Sesame Street to an esteemed career in public media, she not only appreciates what PBS has meant for her own life, but truly understands how important public media is for everyone.  “The fundamental principal about public broadcasting is that it’s available for free to everyone.  If public broadcasting loses funding, many small stations won’t survive.  A lot of people think the big stations can serve the small communities – but the message that gives is that we don’t equally value our small and rural communities. However, the more serious issue is that access to high quality educational, cultural and informational programming would only be available to those who can afford it.  When my family came to the United States, had they been told ‘you need to subscribe to this service‘, they would not have had the financial wherewithal to give me access to Mr. Rogers Neighbourhood.”

Public television relies on a relatively small group of dedicated people – just like yourself – to provide a disproportionate amount of support to ensure that it is available to everyone.  If government funding is lost, this burden will become even greater.

Alice admits that she is one of those very people that PBS is having a hard time with.  She streams her news when and where she wants to hear it; she watches Netflix and uses her Roku.  However, she emphasizes what she sees as the underlying principal in supporting public broadcasting.  “This is not about me giving my support to use this service.  This is about me supporting the service so some other new immigrant or young person or person without wealth can use it; so they can have access to the arts and news and entertainment and all those important things that are going to grow them as a person and give them opportunities they may have not otherwise had.  I don’t want to rely on them having the ability to pay for it, to have access to things that I think are fundamental to human beings.”

Alice wrapped up our discussion with a thought about how public media has become even more important in the last year.  “What I appreciate about public media is how much smarter it makes me.  Public media makes you work a little. We don’t bombastically say ‘this is my opinion and you should believe it and take it at face value’.  In fact, in a way you get far too much information which means you have to think about it and analyze it.  The one thing you don’t have to do is check to see if it’s true”.